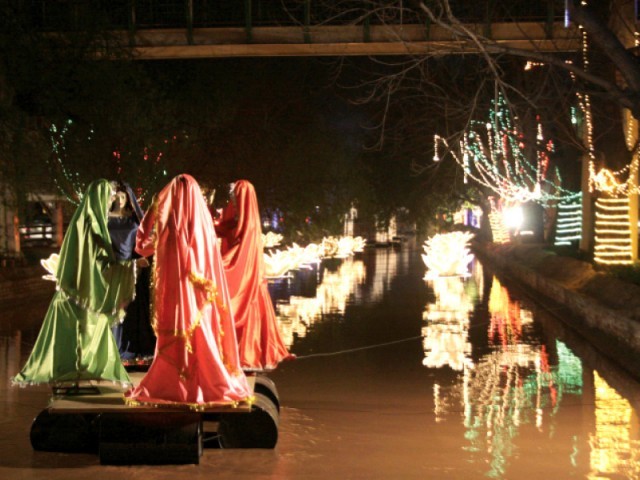 The Canal came to life on Saturday with 23 beautifully decorated floats; wire models of flowers, butterflies and women in traditional attire; and fairy lights along the stretch between The Mall and Jail Road.

Some of the floats feature national land marks including the Ziarat Residency, the Quaid’s mausoleum and Khyber Pass. Another float features men, attired in traditional clothing, dancing. A PHA official said they had designed four floats specifically to catch the children’s attention…the most popular among these appeared to be the one featuring the Angry Birds characters. Two elaborately designed peacocks bow to form a gateway at The Mall end.

Muhammad Waleed, who had stopped to view the display with his family, said the floats looked very beautiful. He appreciated the PHA’s decision to reserve a float for the Quaid’s residence in Ziarat that came under attack last year. “The attention to detail on these floats catches one’s attention,” he said.

The Mela caused a traffic mess along the Canal. Most motorists speeding on the underpass slowed down to view the floats along the Canal. Several vehicles were seen parked on the right side of the road, their drivers trying to take pictures of the floats. The intended approach to the exhibit was from an overhead bridge between Jail Road and The Mall. Very few people used the overhead bridge. Most of the sightseers preferred parking their cars on the far right side of the road.

Chief Traffic Officer Capt(r) Sohail Chaudhry said several motorists had been seen switching lanes, extreme left to right, to see the floats…this was very dangerous. He said the decorations should have been placed some distance from the underpass.

He said many motorists exiting the underpass were reducing speed, which was hazardous. He said from Sunday they would place barriers and depute more wardens to deal with the traffic problem. He said people also needed to be careful and realise that this was a high-speed road. PHA Coordination Director Sohail Bhatti said the floats had been designed to reflect the heritage of Pakistan, wildlife, culture and life in villages. He said work on these floats began two months ago. “Hopefully the people will appreciate our efforts.” To a question about the traffic mess, he said, the display was meant to be viewed along the road side. “Hopefully the city traffic police will sort it out.” He suggested that people use the over head pedestrian bridge.

The floats have been prepared by a private company for Rs6.35 million. The cost of electricity has been estimated at Rs11 million, a Parks and Horticultural Authority official said. The Canal Mela will continue till March 31.