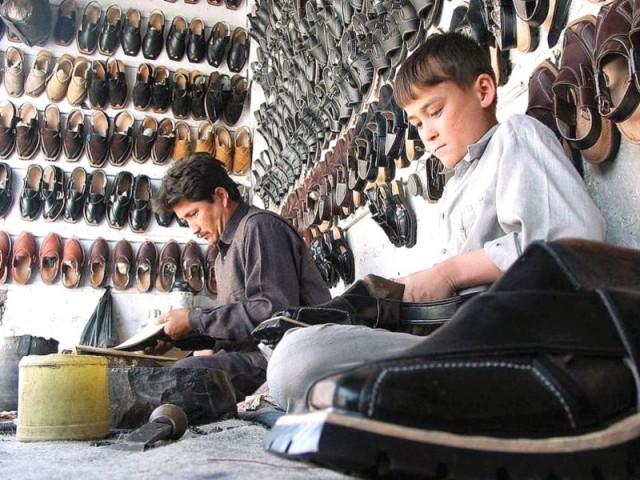 Although the demand for Peshawari chappals overseas is existent, local chappal makers express discontent over the fact that they are not exported abroad. PHOTO: FILE

As he works hard in his shop, crafting what are famously known as the Peshawari chappals, the unassuming Rukhullah Khan is not aware of a raging controversy that is making the rounds these days.

British fashion designer Paul Smith has recently introduced a new men’s sandal being sold for £300, which is approximately Rs50,000. The sandal is essentially the Peshawari chappal, which men of Khyber-Pakhtunkhwa, in particular, and Pakistan, in general, have worn since time immemorial.

While the debate continues over copyright issues and cultural appropriations, craftsmen like Rukhullah continue the centuries-old tradition of making these sandals.

Rukhullah has been in this business for the last 15 years. He acquired training of this craft for about four years and was trained by an expert chappal maker.

For those four years, he was paid Rs20 a day. He first graduated to becoming a karigar (trained worker) and later on, a chappal maker.

He now has ten trained workers working under him. Together, they make Peshawari chappals of good quality and supply them to shops in big cities such as Peshawar, Lahore, Islamabad, and also cities like Kabul and Jalalabad in Afghanistan.

“My work is difficult and income is too less,” says Rukhullah. He shares that a good pair of Peshawari chappals costs him about Rs800, and would be sold in his shop for about Rs1,000. The same pair will be sold in Charsadda for Rs1,500 and in cities like Islamabad for Rs3,000.

One reason Rukhullah earns so less, according to him, is that the chappals are not exported to foreign countries. The demand for them overseas is, however, existent since “many Pakhtuns working in Saudi Arabia or other Gulf states often buy the chappals and take them for their bosses abroad. Once they wear them, they ask for them again,” explains Rukhullah.

The sale is also seasonal. “Our product is used in Pakistan and Afghanistan in summer season, so most of our trained workers have no work in winter,” he adds.

Another trained Peshawari chappal maker, Ihsanullah, says that there are more than 200 shops of Peshawari chappals in Shabqadar alone, which is the hub of this craft. From here, they are supplied to all over Pakistan and Afghanistan.

Every shop has at least ten trained workers and five untrained workers. Thus, the Peshawari chappal industry in Shabqadar alone provides work to about 3,000 workers. They earn from Rs300 to Rs500 per day.

In Ihsanullah’s opinion, Charsadda may be famous for these shoes, but Shabqadar has more shops that offer a greater variety. He also shares that Shabqadar is the biggest supplier of these chappals in Pakistan.

But the bitter truth is, as Ihsanullah says, “there is no incentive for us to work in this industry, neither from the government nor non-governmental organisations.”

While majority of the workers in this industry are adult males, there are some women and children who also work here. Asif and Mushtaq, aged eight and ten respectively, are two children whose work comprises polishing these shoes and getting paid Rs50 to Rs100 daily.

They work at these shops when they come back from school. The women who work here stitch these shoes on machines and earn money to support their families.

One skilled craftsman, 50-year-old Nisar Khan, was once a famous Peshawari chappal maker of this area. But he ended up deserting the craft because the work was too strenuous and the income was too low for him to survive. Nisar now buys factory-made shoes from Lahore and Karachi and supplies them to other cities.

About the history and design of these chappals, Nisar says that making these chappals is a centuries-old profession in Shabqadar, and those in this profession were called mochis (cobblers). He explains that in the past, there were two main designs of the Peshawari chappal: panjaadar (open) and bund (closed), but now only the closed pattern is popular.

These heirlooms endure, but not for long