The new sandal from Paul Smith has amused shopke­epers in Peshaw­ar, both for its $500 price tag and its outdat­ed look.
By AFP
Published: March 11, 2014
Tweet Email 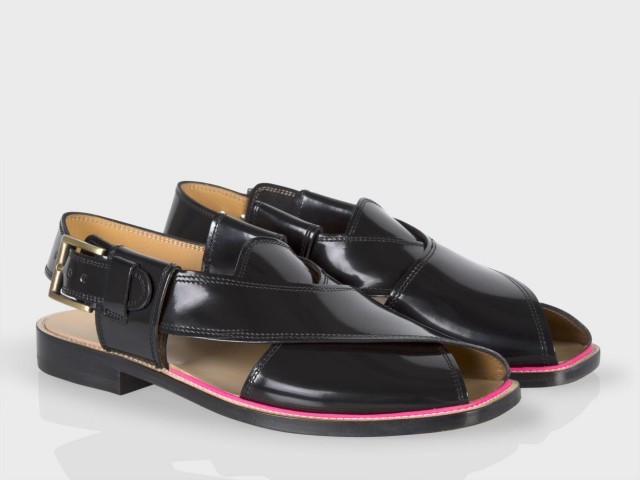 PESHAWAR: The ‘new sandal’ from designer Paul Smith that created much hype on social media has amused shopkeepers in Peshawar, both for its $500 price tag and the fact that they say that it is an outdated look.

On Monday, a lot of people took to social media to berate the fashion house for “stealing” the design of the Peshawari chappals for its “Robert” sandal which is priced at 300 pounds ($500).

However, in the markets of Peshawar, the city from where the chappal originates, shopkeepers were more concerned that the British designer known for his signature multi-coloured stripe was behind the times.

“This design is outdated. Some people in their 60s or 70s ask for that design sometimes,” Kamran Khalil of the city’s Shoe Shop told AFP.

The high-gloss black leather, thin sole and open toe of the Paul Smith sandal have long been out of favour in Peshawar, Farhadullah, whose family have been making shoes in Peshawar for 70 years, explained.

“My father use to make this design but I don’t make it any more as there is no demand for it,” he told AFP.

“Only some retired military or police officials come and ask us to make it for them.”

There was astonishment that the Paul Smith version, which comes with a thin neon pink stripe along the side, could cost so much more.

“If you want to buy a cricket bat used by Shahid Afridi or Sachin Tendulkar, you have to pay millions for it,” he said.

“The price is not high because of the wooden bat but due to the name of Afridi or Tendulkar, and so Paul Smith is selling his name.”

After a day of Twitter outrage and an online petition, the Paul Smith website changed the product description to say the sandal was “inspired by the Peshawari chappal“.

Khalil said Pakistan should be pleased that such a famous designer had been inspired by the traditional sandal – but urged Paul Smith to bring the design up to date.

“I am proud that the traditional Pashtun shoe is now available in the west as fashion, but the designers should work more to bring the best and latest designs,” he said.

Responding to tragedy: Lives continue to be lost as aid trickles into Thar