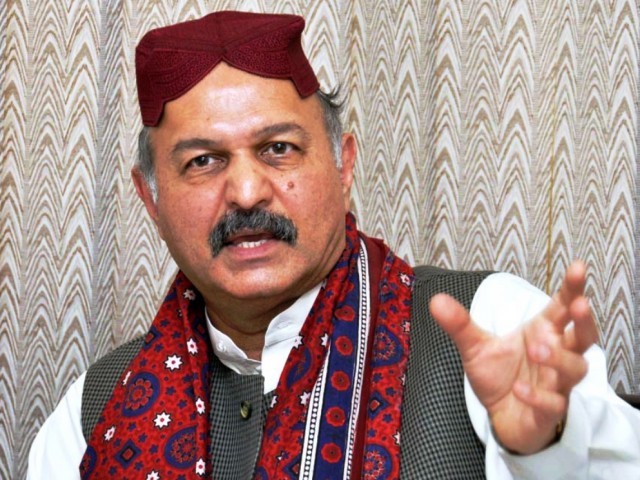 'Most issues in Sindh are man-made and they occur due to government’s negligence,' says PML-Q general secretary Mushahid Hussain Sayed. PHOTO: APP/FILE

KARACHI: The death of numerous children in the ongoing drought in Thar dominated the entire agenda of the All Parties Conference called by the Pakistan Muslim League-Quaid (PML-Q) to discuss Sindh’s issues.

The participants agreed that the drought took so many lives due to poor governance and corruption of Sindh’s ruling elite. The representatives of most political parties based in the province gathered at Avari Towers on Sunday afternoon to voice their opinion on the ongoing issues of Sindh. Needless to say, the massive death toll in Tharparkar was the biggest concern.

In the inaugural speech, PML-Q general secretary Senator Mushahid Hussain said that most issues in Sindh are man-made and they occur due to government’s negligence. “We also raised the issue of Thar in the Senate and will build a consensus through this all-parties conference as well,” he assured.

The senator expressed, however, his disappointment that the party with the largest stake in Sindh — the Pakistan Peoples Party (PPP) — and the one handling the federal affairs — the Pakistan Muslim League-Nawaz (PML-N) – did not attend. “The absence of the PPP and the PML-N shows that these parties are not serious to resolve the issues and do not feel the need to build consensus.”

PTI’s Hafeezuddin Advocate pointed out that doctors and other paramedics have not even reached more than 70 per cent of the affected areas even now. “We found that only one female doctor is present for the entire population of Mithi,” he said, referring to his recent visit to Thar. “The situation in Thar is far worse than what we see in the media. There are no serious government efforts as they are unable to provide even basic medicines.”

MQM’s Khawaja Izharul Hassan felt the situation in Thar and other area worsened because the government did not remove rural and urban discriminations. “There is a need to urbanise the entire province by abolishing the feudal system and organising local bodies’ elections throughout Sindh,” he suggested.

His suggestion was, however, watered down by ANP’s Wakeel Khan Swati when he pointed out that the MQM and the PPP were both in power in the last government but failed to achieve any progress. “Instead of resolving such issues, these parties practiced ethnic politics, which ultimately harms the residents of the province.” In the end, the participants decided to set up a Sindh Task force with the collaboration of all stake holders to look into Sindh’s issues, especially the drought in Thar. The participants also stressed on holding local government elections immediately.