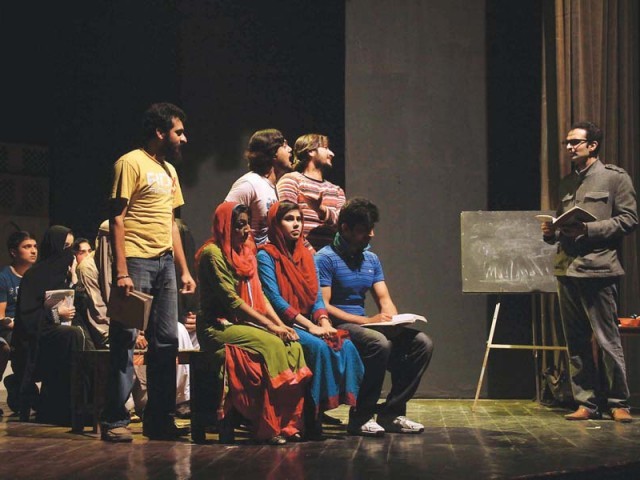 A political satire woven out of the forbidden kite-flying pastime of basant. PHOTOS: SHAFIQ MALIK/EXPRESS

There have been many attempts to understand the impact of banning basant in Lahore. Especially during a period of rising fanaticism, there is a strong argument that by suppressing expressions of culture, the ban has added fuel to fire. Ajoka Theatre’s latest play Lo Phir Basant Ayee, which premiered on Tuesday night at Alhamra Arts Complex, is fascinating for several reasons: partially because it is not your typical basant story, and partially due to the accessibility of its message.

A political satire woven out of the forbidden kite-flying pastime of basant. PHOTOS: SHAFIQ MALIK/EXPRESS

The atmosphere was such a spectacle that the indomitable Intizar Hussain described the performance by saying:  “We don’t have basant in the city, but today we made basant here!”

Hussain provided a reminder that the tradition of kite-flying began in 1200 AD and started in Dehli. Basant is deeply connected to the legacy of the Sufi saint Hazrat Nizammudin Auliya. Even back then, it was Muslims who celebrated the event, in what was described as a season of love and peace. The ban on basant seems to address a broader theme within the state, it is things we cannot understand or control that must be banned.

Shahid Nadeem, executive director of Ajoka Theatre, attempts to address this dialectic of culture and fanaticism. Lo Phir Basant Ayee tries to explore the issue of the kite ban from several perspectives and reclaim the lost space for celebration and culture. It starts by looking at Ustaad Maaju, an old man captivated by the nostalgia and representation of kite-flying. He comes from a family of kite-makers but now, due to the ban, he has fallen from grace and is being pressured to sell his home.

Maaju is played by 82-year-old Arshad Durrani, who is making a comeback to the stage. Maaju provided a stellar performance, which sets the tone for the play.

“I feel as if I have been reborn. I was born in this city, and I know the people of this city who were connected to kite-flying and kite-making. As a child I watched them, as a boy I watched them, and as a young man I watched them, so I tried to portray that,” said Durrani after the play.

Furthermore, the story expands into other characters of the city, such as the Professor (Abbas Hussain) who finds himself being told what to teach by fanatics. His classes are routinely disturbed by members of the Rok Tham Committee, a fictional fanatical group whose world view includes the complete murder of history and thought.  This group also harrasses young lovers,stopping them from sitting on the same bench, and people who dream of celebrating basant.

The connotations are overt yet entertaining, and in the looming context of ongoing dialogue with militants, the play is very political. This is something Ajoka has always done — maintaining a balance in the realm of theatre as a platform for political struggle.

The play is heavy on satire, routinely questioning the logic of fanaticism and its patron, which is the state. The intruders in this case are led by Khan Thekaydar (Sohail Tariq) whose desire is to control culture, history and education. The local police prove to be entertaining and serious.

“We show that financial interest has tried to occupy the city and minds of the people, you see an alliance between the state and the fanatics. Our state has actually abdicated its responsibility, thereby failing to protect the freedoms of its citizens,” adds Nadeem.

Director Madeeha Gauhar maintained her disciplined style of directing and ensured that the play represented the aspirations of the old-city culture and its local aesthetic. Due to the nostalgia surrounding the subject, one thing is for certain, the audience loved it and left in a celebratory mood.

The audience’s feedback showed that this event was nothing alien to our culture, and basant is still inherent in the social-cultural fabric of the city.

The play will also be performed as part of the ongoing Napa Theatre Festival in Karachi on Saturday, March 15, 2014. Tickets are available for the performance at Napa, Aghas, Farids, The Forum and The Indus Valley School of Art and Architecture.