The police has regist­ered a murder case and is invest­igatin­g
By Our Correspondent
Published: March 9, 2014
Tweet Email 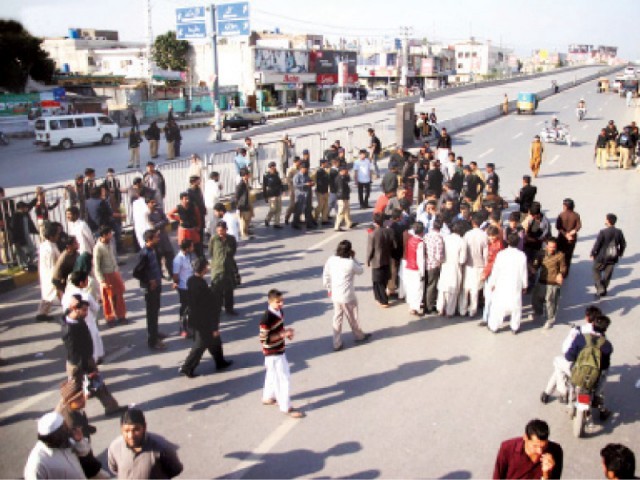 Relatives of the victim blocked Benazir Bhutto Road after he was pronounced dead. PHOTO: ONLINE

A student was shot dead by unidentified men on Saturday near Zia Masjid in the Shahzad Town area.

According to the police, Raja Khurram, a first-year student at a college in sector H-8, was shot dead near the Shakrial CNG filling station.

Khurram was shifted to Benazir Bhutto Hospital in critical condition and died at the hospital. His family claimed doctors’ negligence was responsible for the death and briefly blocked Benazir Bhutto Road in front of the hospital before taking the dead body back to Islamabad, according to a police officer at the Waris Khan Police Station in Rawalpindi.

An official at the Shahzad Town Police Station said the motive behind the killing appears to be an enmity between Khurram and “some other people”.

“It seems that the attackers targeted Khurram because no one else was shot or injured in the attack,” the official said.

He said the police had registered a murder case and were investigating. No arrests have been made yet.