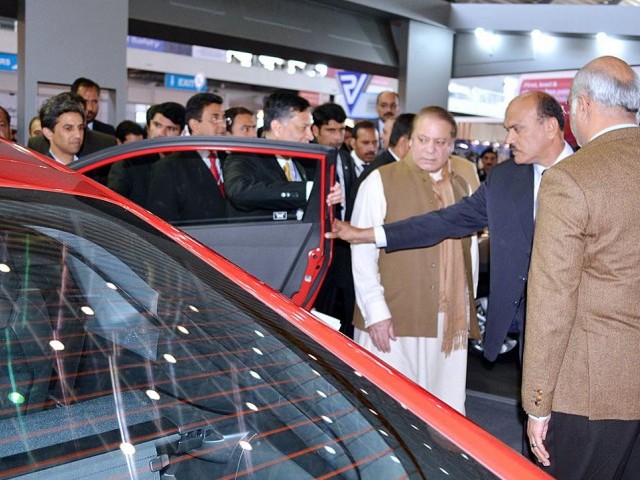 Prime Minister Nawaz Sharif (C) is given a tour of the Pakistan Association of Automative Parts and Accessories Manufacturers Show at the Lahore Expo Centre on Thursday. PHOTO: APP

Despite government’s apparent confusion over the upcoming auto policy, the industry has pinned its hope on Prime Minister Nawaz Sharif’s wish to see a ‘Made in Pakistan’ car, expecting to get some incentives.

The local auto industry partly succeeded in getting the attention of the prime minister, who inaugurated the Pakistan Auto Show 2014 in Lahore on Thursday. However, it failed to get any promise from him on the two biggest issues of the industry — a blanket ban on imported used cars and the issue of liberalising trade with India.

Nevertheless, the prime minister’s directive to the government officials to immediately sit with the industry officials and chalk out the future policy has given hope to the local industry. “We are hopeful of getting government support including the national car policy that the prime minister indicated in his speech at the Pakistan Auto Show 2014,” said Pakistan Association of Automotive Parts and Accessories Manufacturers (Paapam) Chairman Usman Malik.

Malik, who represents over 2,800 industrial units that produce auto parts, is confident that the prime minister’s directive to the government officials would bring some policy changes. “We’re especially looking forward for the national car policy as it will support the local manufacturing and assembling industry,” he added.

Auto assemblers say their fate hangs in the balance owing to the uncertainty in policies especially on liberal trade with India and the country’s import policy of used cars.

Automobile analysts say that the unusual delay in the announcement of the Auto Industry Development Programme II (AIDP II) suggests that the government is facing problems in dispelling the pressures of the two competitors: carmakers and car importers.

“The government seems confused over the much-awaited AIDP II, which is why it has taken several months in announcing it,” said JS Global Capital analyst Atif Zafar. “It is certainly under pressure from carmakers and car importers who have considerable influence in government circles.”

The delay in auto policy has fuelled speculations. Some say the policy will increase the age-limit for used cars from the current three years to five years, while others say the government may give some incentives to the car assemblers.

Another headache for the auto industry is its clear divisions on the issue of the trade with India. While the only representative of auto parts’ makers, Paapam, is dead set against the liberal trade with India, Pak Suzuki – country’s largest carmaker – is openly supporting the cause.

Pak Suzuki seems more enthusiastic unlike the other two carmakers – Honda Atlas Motors and Indus Motors – because of Suzuki Maruti, an affiliate of Suzuki Japan with over 50% market share in India from where it can import cheap parts for its cars in Pakistan.

Zafar believes the auto part makers in Pakistan are more vulnerable to liberal trade with India compared to the local car assemblers.

“In case Pakistan and India start trading, the likelihood of Pakistan importing car parts is much higher than the import of Indian cars. This is why Pakistani car part makers are more exposed to competition,” he added.

Former Paapam chairman Syed Nabeel Hashmi said that auto part makers just need an assurance from the government that a liberal trade regime with India will not hurt their interests.