Modus operan­di sugges­ts the same group is behind both heists.
By Our Correspondent
Published: March 8, 2014
Tweet Email 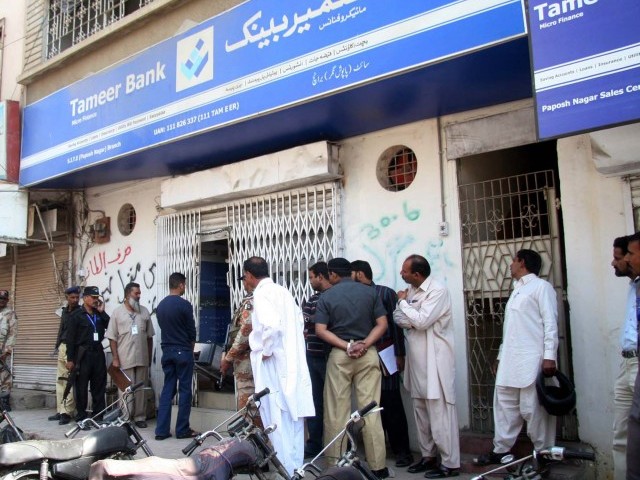 Security and bank officials gather outside the Tameer Bank which was burgled on Friday. PHOTO: PPI

KARACHI: At least Rs7 million were looted in two back-to-back bank robberies in broad daylight in district Central of the city on Friday.

The first robbery took place at around 9:15am and the second at around 10:35am. Investigators believed that the same group of robbers, belonging to a militant group, was behind both the robberies and the same modus operandi was used in both of them.

The first bank robbery took place at Tameer Microfinance Bank, located in Nazimabad’s Chandni Chowk area that falls within the Paposh Nagar police remits, where at least six armed men entered the bank and looted around Rs3.5 million from the cash counter.

SHO Rizwan Patel said that the robbers took around eight minutes to complete their swift operation and confirmed that CCTV footages have been obtained. The robbers also took cell phones and other valuables from the bank’s staffers. “All the robbers were clad in shalwar kameez and were talking with each other in Pashtu,” said the officer.

Just over an hour after that, a group of robbers targeted a branch of the JS Bank located in Block 14 of the Federal B Area within the limits of the Jauharabad police station.

The robbers took the security guards’ weapons and then held the staffers hostage at gunpoint before looting Rs3.5 million from the cash counter.

As in the previous robbery, the security guards at the JS bank also did not make any attempt to resist the robbery. However, some of the staff members did try to resist and were promptly beaten up by the robbers. This robbery also took place within eight minutes and the robbers managed to escape on their motorcycles.

The branches of at least eight different banks in the city have been robbed this year. “This has become one of the most profitable businesses in Karachi,” said Special Investigation Unit chief SP Farooq Awan.