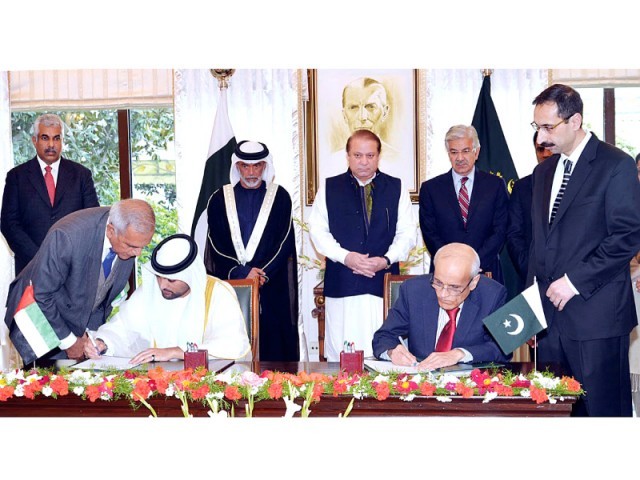 A Memorandum of Understanding (MoU) was signed between Private Power and Infrastructure Board (PPIB), Ministry of Water & Power and Arab National Construction (ANC) Holding LLC Dubai for the construction of two 660 megawatt (1,320 MW) coal-based power generation plants at Pakistan Power Park in Gaddani. The company will also construct a jetty as part of the deal.

The project will bring in approximately US$2.5 billion in investment in Pakistan and is scheduled for completion within three years. Prime Minister Nawaz Sharif and Chairman ANC Tayeb Abdul Rahim Ahmed Al-Baker witnessed the signing ceremony. Minister for Water and Power Khawaja Muhammad Asif, junior minister Abid Sher Ali, Secretary Water and Power Saifuallah Chatta and other officials were also present on the occasion.

Earlier the ANC delegation called on the prime minister at PM House. The prime minister termed the project ‘another milestone towards energy self-reliance’ in Pakistan and said the energy sector is a ‘priority sector’.

The PM said the MoU with Qatar on the import of LNG and the US$1 billion investment by ADB in the Jamshoro power generation project are ‘clear manifestations of foreign investors’ trust in the government’s pro-investment policies’.