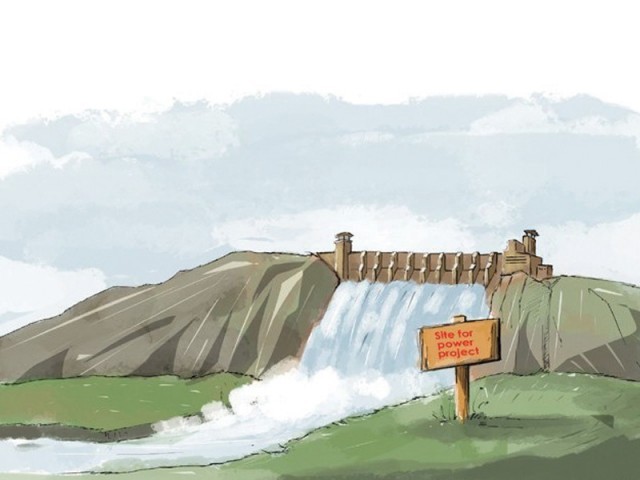 The board gave the green signal for inviting proposals for 350MW Athmuqam hydropower project to be set up on Neelum River in Azad Jammu and Kashmir. ILLUSTRATION: JAMAL KHURSHID

ISLAMABAD: The Private Power and Infrastructure Board (PPIB) has accorded approval to a host of power projects that will produce 2,630 megawatts.

According to a statement, the go-ahead was given in the 95th meeting of the PPIB board here on Wednesday, which met under the chairmanship of Federal Minister for Water and Power Khawaja Muhammad Asif.

It cleared the way for issuance of a letter of interest to the consortium of CWE Investment Corporation China and Trans Tech of Pakistan for 590MW Mahl hydropower project. It will be set up on Jhelum River on the boundary of Punjab and Azad Jammu and Kashmir.

The project has been awarded to qualifying bidders after inviting proposals through international and domestic media.

The board approved issuance of a letter of intent to the joint venture of Al Mirqab Capital of Qatar and Sinohydro Resources of China for developing two coal-fired power plants of 660MW each at Port Qasim, Karachi.

The board gave the green signal for inviting proposals for 350MW Athmuqam hydropower project to be set up on Neelum River in Azad Jammu and Kashmir.

Meeting participants said many foreign and domestic investors had shown interest in establishing power projects in Pakistan Power Park at Gadani. In this regard, standard operating procedures for the selection of bidders were submitted to the board, which were approved.

In order to improve coordination and fast-track implementation of independent power projects (IPPs), the government has decided that PPIB should execute and issue tripartite letters of support with entities of provincial governments, Azad Jammu and Kashmir, Gilgit-Baltistan and sponsors as co-signatories for existing as well as future private or public-private partnership projects. The board approved a standardised tripartite letter of support.

In an attempt to encourage participation in developing power projects based on Thar coal, the board supported amendments to Power Policy 2002, as suggested by Sindh government and Thar Coal and Energy Board.

Speaking on the occasion, Khawaja Asif said the government was making maximum efforts and undertaking a multi-pronged strategy to counter power outages. “We are also prioritising the use of indigenous resources for power generation,” he said.

PPIB managing director said at present 29 IPPs with a total capacity of 8,657MW were operating and providing electricity at higher levels of efficiency. IPPs are providing 57% (5,900MW) of electricity to the national grid.