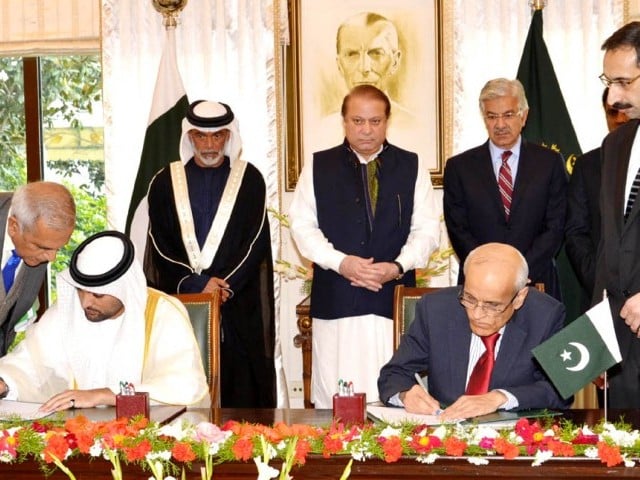 ISLAMABAD: Private Power and Infrastructure Board (PPIB) and the Arab National Construction (ANC) holding LLC Dubai signed an MoU on Wednesday for the construction of two coal fired power plants of 660 mega watts each (1,320 MW combined) in Gadani.

The signing ceremony was witnessed by prime minister Nawaz Shareef himself.

Signed MoU also extends to the construction of a jetty in the Pakistan Power Park at Gadani. The project is expected to bring in almost $2.5 billion investment in Pakistan and will be completed in three years.

Earlier, the ANC delegation led by its chairman Tayeb Abdul Rahim Ahmed Al-Baker called on the prime minister at the PM House.

Nawaz appreciated the investment by ANC in Pakistan and said that it will help the country overcome energy shortages.

The premier said that his government has prioritised the energy sector as priority and have planned 10 coal fired projects of 660 MW each in the Pakistan Power Park. Of these projects, six will be built by the Chinese, two will be constructed by ANC Dubai and one project has been initiated by the government.

In addition to the Power Park, Pakistan is seeking investment for a number of short and long term power projects including two 660 MW coal-fired power plants at Port Qasim, 12 coal based 660MW power plants at Sahiwal and five other locations in Punjab Province. The government also intends to start coal mining in Thar and set up mine-mouth power plants in Sindh Province. Not to be left behind the government is also looking to set up a 1,000MW solar power park in Punjab, a 1,420 MW hydel power house at tunnel IV of the Tarbela Dam and a 1,310MW hydel power house at tunnel V of the Tarbela Dam.