US offici­al says US got proper notifi­cation from Russia ahead of test, initia­l notifi­cation pre-dated Crimea crisis.
By Reuters
Published: March 5, 2014
Tweet Email 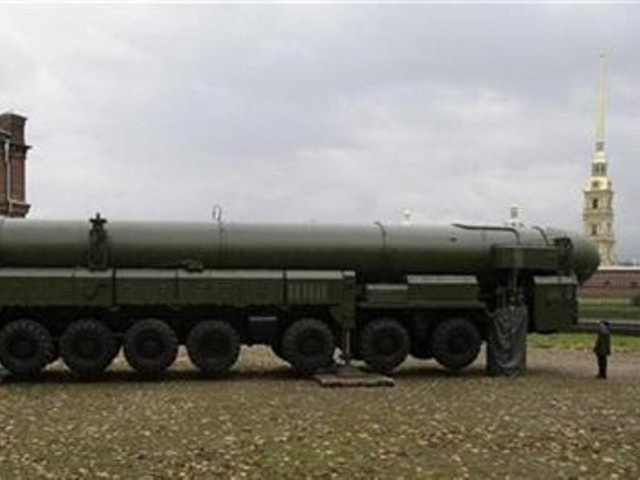 MOSCOW: Russia said it had successfully test-fired an Intercontinental Ballistic Missile (ICBM) on Tuesday, with tensions running high over its military intervention in Ukraine’s Crimea region.

A US official said the United States had received proper notification from Russia ahead of the test and that the initial notification pre-dated the crisis in Crimea. The Russian Defence Ministry could not be reached for comment.

The launch site, Kapustin Yar, is near the Volga River about 450 km east of the Ukrainian border. Kazakhstan, a Russian ally in a post-Soviet security grouping, is further to the east.

Russia conducts test launches of its ICBMs fairly frequently and often announces the results, a practice seen as intended to remind the West of Moscow’s nuclear might and reassure Russians that President Vladimir Putin will protect them.

Russia and the United States signed the latest of a series of treaties restricting the numbers of ICBMs in 2010, but Moscow has indicated it will agree further cuts in the near future and is taking steps to upgrade its nuclear arsenal.

Putin has emphasised that Russia must maintain a strong nuclear deterrent, in part because of an anti-missile shield the United States is building in Europe which Moscow says could undermine its security.

Moscow says it is concerned US interceptors could shoot down some of its ICBMs in flight, weakening its arsenal. The United States says the shield is meant to protect against threats from states such as Iran and poses no threat to Russia.

The 20-metre long RS-12M, known in NATO parlance as the SS-25 Sickle, was first put into service in 1985, six years before the collapse of the Soviet Union, and is designed to carry a nuclear warhead. Its range is 10,500 km.