DG FC Zeb claims Orakza­i area has been cleare­d of milita­nts, and IDPs will move back to their homes.
Published: October 26, 2010
Tweet Email 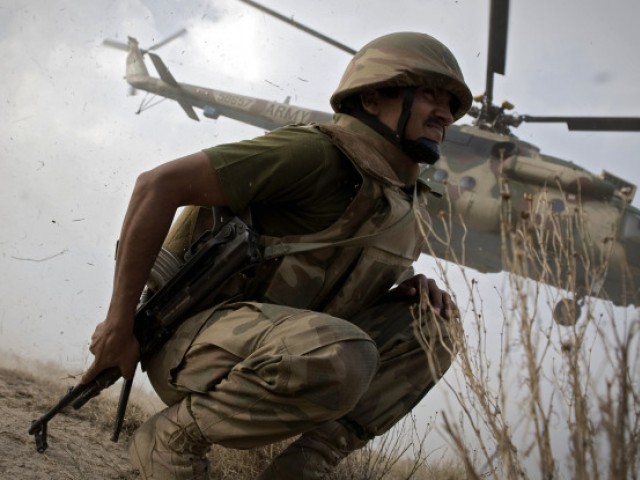 DG FC Zeb claims Orakzai area has been cleared of militants, and that IDPs will move back to their homes. PHOTO: AFP

Security officials in Mohmand Agency intercepted nine militants in tehsil Safi late Monday night, after which gunship helicopters and ground troops moved into the area, according to the assistant political agent. Forces conducted the operation by firing mortar shells at militant hideouts.

Official figures given by authorities confirm that five dead bodies identified as militants were found after the shelling, while four others are reported to have been injured. The area has been cordoned off and search operations are underway to apprehend the injured militants.

Tehsil Safi was the spiritual homeland of the Tehreek-i-Taliban Pakistan (TTP) when it emerged, and Mohmand Agency shares a border with the tumultuous Kunar province of Afghanistan. The area is a highly sensitive zone as schools have previously been blown up here.

Mohmand Agency is used as one of the areas where militants violate international borders and move into Pakistan territory and move either to Khyber or Bajaur Agency making their way to Lower Dir, North and South Waziristan.

Iftikhar Firdous reports that security forces say the cross border territory adjacent to Mohmand Agency is used by militants for insurgency. Security operations are conducted in the area when militants move into Pakistan.

The government has tried to repatriate 450,000 people to Mohmand Agency, who had migrated due to the operation. Security forces claim 80 percent of Mohamnd Agency is cleared of militants but people are not willing to return to the area because of the security threat since those who have returned face the brunt of attacks by militants.

Inspector General (IG) Frontier Corps (FC) Nadir Zeb claims 90 per cent of Orakzai agency has been cleared of militants as a total of 11 militants have been killed in the latest assaults in tribal areas.

Six militants were killed after they attacked a checkpost in the Tanda area of the Lower Orakzai Agency.

According to IG FC Nadir Zeb, 654 militants have been killed, and over 250 arrested during the operation.

He also confirmed that repatriation of those displaced by the operations will begin tomorrow.