Today could prove to be tricky for stars walkin­g the red carpet as rain pelts down on LA.
By Reuters
Published: March 2, 2014
Tweet Email 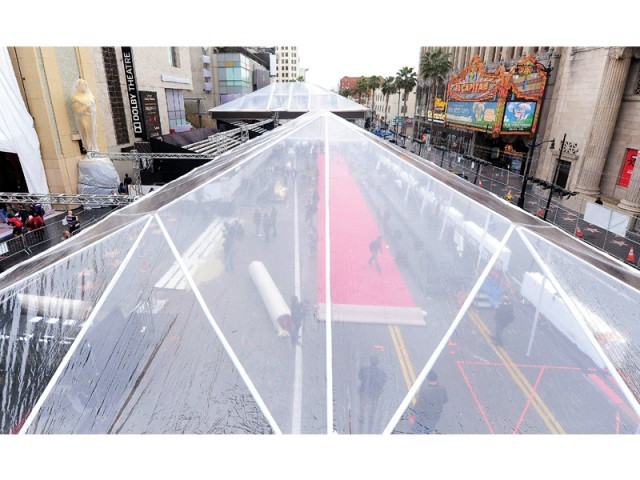 Organisers are taking every possible precaution to ensure there are no glitches at the Oscars. PHOTO: FILE

The most glamorous of all runways, the 500-foot-long Oscars red carpet, might be a fashion disaster today.

A rare heavy rain storm on Friday in Southern California has soaked parts of the red carpet laid down on Hollywood Boulevard, where movie stars and Tinseltown power-brokers will make their grand entrance to the Academy Awards, film’s highest honours.

Dozens of workers spent the morning securing the red carpet from the pelting rain and overflowing street gutters 48 hours before hundreds of attendees will parade designer gowns, extravagant jewels and tailored tuxedos.

Workers cleared pools of water that had collected atop the tent built to shield stars from the rain while others hustled to plug any leaks and a team wielding squeegees pushed standing water out of the protective plastic over the red carpet.

“It has been a challenge, a lot of water in a short amount of time,” said Joe Lewis, the associate producer of arrivals for Hollywood’s biggest night. “There is no perfect science to (a) rain plan. It is going to rain, there is going to be water, we have got to protect as best as we can.”

The rain began in Los Angeles on Thursday evening and according to the National Weather Service, is not expected to let up until Sunday morning, hours before Hollywood’s movie stars begin their walk across the red carpet at 3pm PST (2300 GMT).

“I think the carpet is probably wet underneath us, which is going to be a problem in a couple days,” said Doug Neal, the stage manager of the Oscars red carpet show. “But we are well protected. They have put this up a few days ago, so I think we will be all right.”

While the rain is a welcome sight for many in California, which is mired in its third year of a debilitating drought, high winds and debris-caused road closures, power outages and about 1,000 homes in the Los Angeles area were ordered to be evacuated due to possible mudslides.

As a precaution, organisers had already wrapped the large, gilded Oscar statues that flank the red carpet like columns to shield them from possible water damage.

“We know how tough it is, but when they get out of the car on Sunday afternoon, this is their first impression of the Academy Awards and, by God, we want it to be a good one,” he added.