MBroidered: The latest from Maria B

Artist melds consumer and social fantasies perpetuated with a Renaissance-era spirit of light, technique and idealism. Every time he works in the studio, he is compelled to create a masterpiece, like it’s the last painting he’ll ever paint. This is Salman Toor, a painter who graduated from The Pratt Institute with an MFA in 2009.

Traditional storytelling devices attract him — such as the way narratives unfold in the fiction of Daniayal Mueennuddin, the 19th century French writer, Guy de Maupassant, children’s storybooks and illustrations, and the Renaissance compositions of colourful Venetian painters like Paolo Veronese. He doesn’t expect the common reader to know the significance of these painters, but it might be enough to know that they were Christian painters who rediscovered the Roman love affair with the human body. They created decorations for the churches and palaces of Venice during the economic boom, now known as the Venetian Renaissance.

The main challenge for Toor is to use the sensual qualities of paint and the human body in a context larger than itself. Toor says, “When I paint, one of the things I think about is the ubiquitous (and quite tiresome, given the prevalence of Smartphone use) role of photography in today’s world.”

He believes that painting can only be relevant if it transforms our perception in a way that photography possibly cannot. The way the world is edited when reality is translated by a draftsman on to a plain surface, is where the magic of figurative paintings resides. A painter can exercise the kind of total tyrannical control over the image, in a way that photography cannot.

Skill is usually considered quite a useless thing in today’s art world (with a few famous exceptions). What matters most is the gesture, the concept, the bare distillation and ambitious scale. “In that respect I feel like I have more in common with a talented local carpenter than I do with a contemporary visual artist (except for my education). Uncomfortable situations that describe the identities of participants of our society are particularly fun to paint for me,” he says.

In his paintings, poverty, glamour and beauty oscillate between caricature and reverence in a land of daisies and four-leaved clovers. He often uses smiling faces in his work, because sometimes images or poses are culled from advertisements, but when they’re translated in paint, the images that look mundane and forgettable acquire a foreboding quality under the veneer of frivolity.

He tries to meld consumer and social fantasies perpetuated by the mass-media of urban India and Pakistan, with a Renaissance-era spirit of light, technique and idealism in order to present a unique vision of the complexities and exchanges between South Asian popular culture and the historical traditions of Western idealization.

One of his recent paintings, Maid with Flowers, has been made using oil on canvas. It’s a maid with a vase of flowers on a tray with teacups, walking in an imaginary cartoony landscape. You can see a glimpse of it at the bottom. The landscape consists of rolling hills, poplar trees and a cosy little hut, similar to art seen on truck-art and calendars with Swiss landscapes. The landscape represents the vulnerability of the liberal upper and middle classes, whose wonderland is as thin as a soap bubble. Toor says, “This story gives me a chance to combine two very different worlds: one of all the possible implications of the servitude of an attractive servant girl, and the other of the world of Alice’s adventures in wonderland, Hansel and Gretel, Jack and the Beanstalk, and The Little Mermaid.”

Schoolgirls was made using Charcoal & Ink on Paper. With this drawing, Toor started out wanting to do a cartoon of a schoolgirl, but it developed into an actual person. The idea of a schoolgirl in this country has been transformed in the past few years.  She is the essence of all things vulnerable and innocent. She is a popular victim of the tyranny and terror of religious fanatics. This is the feeling about a schoolgirl he wanted to convey in the picture. He wanted her to be like Little Red Riding Hood in a seemingly safe setting with cute little flowers and streams and old trees. Toor said, “In this way I hoped to give a sense of her cluelessness with regard to the rites of passage of a potentially dangerous place.”

Toor is inspired by the best moments of over 300 painters, whose works are primarily in museums in Europe and the United States — Anthony Van Dyck, Rubens, Velazquez, Titian, Bernardo Strozzi and Veronese, to name a few. 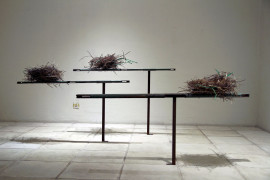 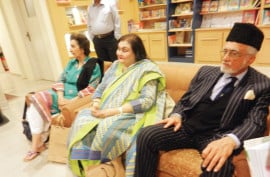 Naz Ikramullah’s thoughts on the cultural mishap of today 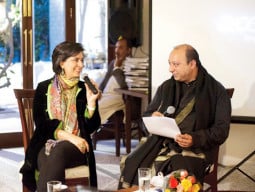 Thank you for this article - there is such music here..... The incredible colors, tones and moods of Salmon's work - and the intention is so direct...I look forward to seeing his work in person somewhere. It is inevitable, with work this universal - feels transformational as I see it on the screen.

Salman is indeed from Aitchison's Class of 2001, same as my eldest brother and was a prodigal artist. I distinctly remember that time when he won the world distinction in Arts in his O-Level examinations. The examiners who reviewed his work reportedly remarked that they couldn't find a single mistake, and for good reason.

I vaguely remember a student of Aitchison won a world distinction in Arts in O' or A' levels some years ago, and I think his name may have been Salman! Is this him?

Zaff | 7 years ago | Reply Go Aitchison College!
Replying to X
Saved ! Your comment will be displayed after the approval.
Error !
Error! Invalid Email.