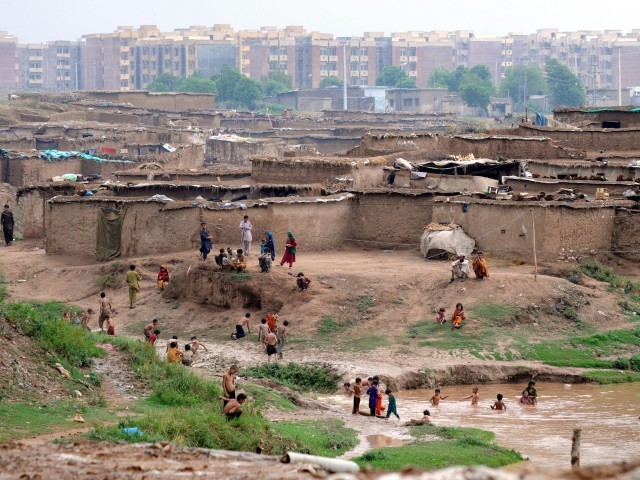 Suggestions from the police regarding slums have created new headaches instead of solutions for the capital’s civic agency, as some of the suggestions fall beyond established policies.

The Islamabad Police has shared a survey list of katchi abadis located within Islamabad Capital Territory limits with the Capital Development Authority (CDA).

The findings of the survey — compiled after conducting door-to-door verification of inhabitants with the help of the police special branch — say there are at least 24 katchi abadis in urban and rural areas of the city, with 13,521 families consisting of 84,591 individuals are living in them.

Out of these 24 abadis, 21 are located in urban areas, while the other three are in rural Islamabad.

During the last five years, the Islamabad Police traced 674 cases to residents of these areas.

Most of the crimes were related to the sale and purchase of drugs and liquor.

The Police said the nine katchi abadis in the City Zone — mainly consist of the G and F series of sectors and Bari Imam — are notorious as drug dealing hubs.

Meanwhile, the Afghan settlements in the Industrial Zone — mainly the I and H series of sectors — are “hazardous for NESCOM and railway tracks” passing through the area.

The survey further says two katchi abadis in the Rural Zone including Ghorri
in Phase-VI and Dhoke Pathana in Sihala are mostly crime free but pose threats due to frequent VVIPs movement on the Islamabad Expressway. “Due to these two slums any untoward incident can happen,” it apprehends.

However, the Mera Jaffar slum in Saddar Zone — the capital’s largest katchi abadi — is known for more serious crimes and some 256 criminal cases have been registered against its residents during the past five years.

This slum has numerous road links in all directions, and is difficult to cordon off in case of an emergency.

The survey says the occupants of the 24 slums mostly work as laborers, sweepers, CDA sanitary staff, and loaders. A number of beggars also live in the slums.

The police have suggested that the CDA remove some 11 katchi abadis at the earliest, while fencing off the remaining 13.

However, a senior CDA Estate Wing officer said the police suggested fencing off some of the illegal slums, which creates a problem for the CDA.

Out of the 24 slums, the CDA only recognises 10. The civic agency cannot develop illegal slums, it can only remove them, the officer said.

The CDA had planned to relocate the residents of the other four slums — Dhoke Najju, Esa Nagri, Haq Bahu and Muslim Colony — to Farash Town.

However, the civic agency has failed to implement both, the relocation plan and the upgradation plan.