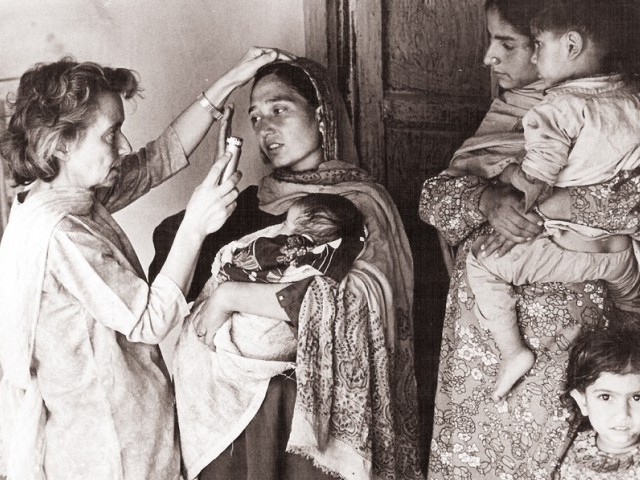 It was almost shocking to note how easily accessible Pakistan’s ‘Mother Teresa’ was. One phone call and three phone messages later, I was standing inside not just the hospital but the private living quarters of the 84-year-old Dr Ruth Pfau — the woman who has, single-handedly, turned the tide of leprosy in Pakistan and won the gratitude and personal attentions of people ranging from military rulers to elected ministers to the general public.

Her face is lined but her gait is nimble. Her decided eyes, beneath a shock of cropped silver hair, glance at me questioningly — she had clearly forgotten the appointment — but without a hint of alarm over the fact that a complete stranger was standing unannounced in her personal chamber within the Marie Adelaide Leprosy Centre in Saddar, Karachi. Patients and nurses are bustling about outside her door, which according to several hospital staffers is always kept ajar.

“Excuse me?” The grip is a bit too firm for an octogenarian’s wrinkled hand. Her media manager whispers that I should try again with a slightly more old school greeting.

She walks into her bedroom to put back the diary she was scribbling in. In the narrow corridor outside, there is a soft board with messages from her patients, some in pink and red card paper. A calendar heavily marked with appointments is pinned next to the greeting cards. Everything in the bathroom, kitchen and living room is squeaky clean.

We are escorted to a small meeting room outside her home. As she steps out of her door, a visibly frenzied elderly man, almost of her own age, runs forth to clutch her hands and waves an envelope into her face. She pats his back, nods at him and signals to one of the nurses to escort him away. He is one of the many abandoned souls that frequent Pfau for attention and care.

With the calculated poise of a woman inured against all sorts of journalists, Pfau generously shares details from the various stages in her life — from her time in Germany to the boyfriend she had there and what she felt when the Berlin wall fell.

“I was studying medicine at a university in West Germany and like any other German girl, I was in love with my boyfriend who studied ancient languages,” she says. “In those days, it was the boy who would propose marriage. I was sure that he would propose and was equally sure I would say yes. I waited day and night for him to say it. They were beautiful days!”

Noticing the surprised reaction that her response had evoked, she chuckles gently. “You must know that I am now a nun. Just before the man whom I loved asked me to marry him, I had received a calling from God. When you receive such a calling, you cannot turn it down, for it is not you who has made the choice — God has chosen you for Himself.”

Ruth Pfau with leprosy patients at the McLeod Road, Karachi in 1960.

But whatever heartbreak she suffered was readily healed by decades of service to victims of leprosy. Pfau is the driving force behind the hospital, which has become the hallmark of leprosy cure in Pakistan. By 1996, this widely feared disease, which has tormented civilisations throughout recorded history, was almost rooted out from Pakistan, according to a World Health Organization report.

“I did not regret anything much; but I’ll say one thing: leading a life committed to service does protect the soul from wounds. These are the workings of God.”

Along with her efforts for ridding Pakistan of leprosy, Pfau has also been at the forefront for relief work every time a disaster struck the country. From the drought in Balochistan in 2000 to the earthquake in Kashmir in 2005 and the devastating floods that hit the country in 2010, Pfau was there each time, extending a helping hand to the victims, completely oblivious to the taxing conditions or the limitations of her age. Her relief work also focused specially on minorities or sections of the population, which were overlooked by the mainstream charity organisations.

From Germany to Pakistan

Pfau was part of a congregation of educationists, Daughters of the Heart of Mary, which was headed for social work to India. When they stopped in Pakistan for a short while, she had to stay back due to some visa problems. It seemed as if fate had other plans.

“When I and another girl from the order beheld the plight of leprosy patients in Pakistan, we were so moved that we decided to stay on as health workers.”

It was a single visit to the leprosy patients’ colony in 1960 on the McLeod Road, Karachi (currently the I I Chundrigar Road), which unsettled her most deeply. She recalls that leprosy patients were living amidst open sewers. The area was heavily infested with rats.

“I could not believe that humans could live in such conditions. That one visit, the sights I saw during it, made me make a key life decision.”

There was no looking back. The leprosy centre built by Pfau is named after Marie Adleide, one of the founders of the congregation established in 1790 to salvage Catholic values from large scale de-Christianisation during the French Revolution. She claims that the hospital has treated over 50,000 families since its inception but the actual number is probably much more.

Pfau has now lost count of the accolades she has received for over 50 years of service at the Karachi leprosy centre, rural Sindh, Khyber-Pakhtunkhwa and parts of Balochistan. “You want to know where I travelled? It’d be easier to talk about where I didn’t travel to!”

Her efforts in the country have been recognised across the world, by states such as Philippines and Austria. Walls of the hospital complex, immediately outside her living quarters, are dotted with framed photographs of her with Z A Bhutto, Mother Teresa, Prince Karim Aga Khan, former president General Ayub Khan and former president General Ziaul Haq. In others, she is seen draped in a shawl or ajrak, smiling and holding patients in Sindh or crossing the trying terrains of Balochistan with the help of a wooden staff.

“People ask me how a German woman was able to mingle so well with Pakistani patients. I just say this: when God chooses you, he makes it easy for you. In fact, I don’t think I would have made it if I were not a nun.”

With the relative of a leprosy patient.

But did she miss Germany, her family and her boyfriend? “Not then; I was hard at work when I was young. Now that I am old, I do miss my family. And yes, I do think about him sometimes.”

She continues to visit Germany for conferences and meetings, reminding me that the congregation that she is a part of continues to draw funding from Germany.

During the chat, nurses flit in and out of the room with reports and queries for her. She is patient, answers gently and is not at all temperamental despite her old age. When she returns to the conversation, it takes a while for her to pick up the threads.

“People ask me if Pakistani men harassed me, if I faced any religious discrimination for being a Christian. I actually had no problems of the sort.”

She claims that despite landing in Karachi as a 29-year-old woman, without a male companion she was able to assimilate well. Men and women alike respected her wherever she went in Pakistan, even when she was young. She has also often worked in teams that comprised solely of men.

The kind ones wore a uniform

Pfau is all praises for former presidents Field Marshall Ayub Khan, General (retd) Pervez Musharraf and Ziaul Haq. Her efforts, she says, were supported and recognised by these men more than any civilian statesman of Pakistan. She goes as far as to say that even at a personal level, she found Ziaul Haq to be “a very interesting man”.

“He helped me reach out to leprosy patients in Afghanistan.”

Her political preferences are clear. But her views left room for clarity; one pined to discover the electoral choices of a woman who has worked in proximity with the weakest and poorest stratum of Pakistan for decades and also rubbed shoulders with the country’s crème de la crème. “Definitely not democracy,” she says abruptly, without the usual 30-second brainstorming rite she had kept up so far. “Democracy needs education — you must be able to make informed choices.”

Quite akin to a concerned Pakistani, Pfau is worried about the country’s security and the performance of new politicians. She, however, has not revoked her German identity, “Not sure what the newer ones have in mind for the country; if I really had to vote, I would vote for an independent candidate.”

Memories of a distant past

Despite her admiration for Pakistani military rulers, Pfau recalls that she was most jubilant when the Berlin Wall was chipped away in 1990, heralding the triumph of democratic values. However, unlike many Germans of the era, she could not secure a piece of the fateful wall as a memento as she was stationed in Islamabad.

“I was a happy 30-year-old when the Berlin Wall fell and democratic values triumphed. But democracy needs education and education is barely given any attention in Pakistan. So I don’t know how far democracy will succeed here.”

Apart from Germany’s reunification, the collapse of this historic barrier also brought Pfau the glad tidings of the end of a war — the World War II — which had scarred her teenage years. She recalls the bombing of her hometown, Leipzig, and her risky crossing of the border into West Germany in order to study medicine and become a doctor.

“Those who have not seen a war of such a scale cannot imagine the horrors. They cannot imagine the scalded and maimed bodies — bodies which need medicines and bandages,” she says. In fact, she attributes her desire to become a doctor to the horror she witnessed in her early years.

“Not all of us can prevent a war; but most of us can help ease sufferings — of the body and the soul.”

New attraction in town: In midst of violence, people show appetite for entertainment