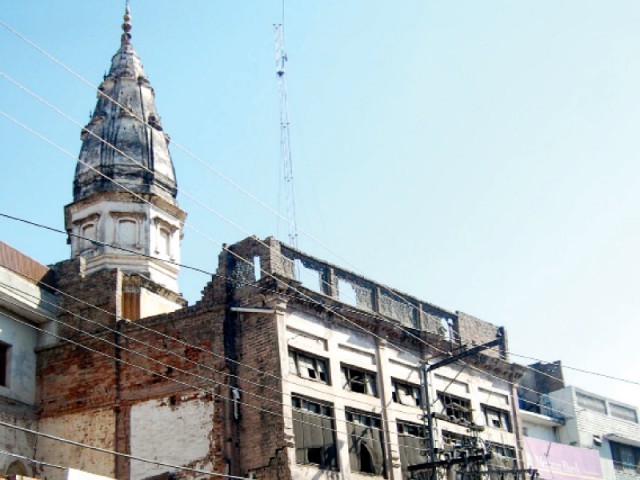 The handful of temples left in the city are crumbling due to neglect and apathy from the state and citizens alike, while religious imagery inside has been defaced with graffiti. PHOTO: MUHAMMAD JAVAID/ Express

For around 5,000 Hindus living in Rawalpindi, Krishna Mandir is the only place of worship left. The temple is built on a four marla plot which is not enough to accommodate the community’s growing numbers during religious ceremonies. But the fact that this temple remains is also nothing short of an achievement. There was a time when its future was also bleak and even today’s there are challenges to its daily existence.

Its not just about religious intolerance, which many remember from amongst the community here. The attacking and burning of temples and statues of Hindu deities in 1993 are still fresh in the mind of 79 year old Mahesh. “We [the Hindus] condemned the attack on Babri Mosque just like our Muslim brothers did. We even held protests but were not spared,” he recalls.

Most Hindus feel that the attacks had less to do with religion and more with money. They believe that the land mafia attacked temples around which Muslim families were living so that the families would vacate the land and the land grabbers could take over, considering the commercial value. Some local politicians led mobs and attacked the temples. “There is a perception that the Hindus [who migrated] had buried their wealth in these temples. Temples on the outskirts of the city were dug but when they found nothing, they destroyed the statues and defaced the statues.”

Over the years, most of the Hindu inhabitants migrated to India at the time of partition, leaving behind a good number of properties and places of worship These properties have been up for grabs. Some allege that locals forged documents in order to occupy land around temples and construct markets. These temples are located in areas where the value of land is very high. This acts as a magnet for the land mafia. “No temple here exists that has been spared by land grabbers,” claims Amarnath, a resident of Kirtarpura.  The helpless community can do nothing to protect the dilapidated and plundered buildings.

When the board was contacted, they said that they are looking after the functioning temples around the province. “The attached properties around these temples have been given on lease while the main buildings of the temples were destroyed or occupied after the Babri Mosque incident,” said Deputy Secretary Evacuee Trust Property Board, Azhar Sulehri. According to him, the zonal offices are looking after the non-functional temples and shrines. But officials at the zonal office denied that this was their responsibility .

Look towards the temples

Out of 11 temples only one temple , the Krishna Mandir, is being used by the Hindu community. A temple in Bhabra Bazaar is being used by the police and political workers as a rest room. The sacred images have been defaced and scriptures scribbled out.  The most important part of the temple, which is the sanctuary where the statue is placed, has been turned into an office.

In the old area of Lunda Bazaar, the temple of goddess Kali no longer exists. There are temples around College Road, Bohar Bazaar, Purana Qilla, Bagh-e-Sardaran and on the outskirts of the garrison city which await protection. A temple in Lunda Bazaar, Mohan Mandir, is said to have been built in 1930 by two brothers Hakim Asa Anand and Hakim Moti. It was also ransacked by an angry mob in 1993.

The members of the Hindu community demand preservation and protection of their religious sites. President of Pakistan Hindu-Sikh Social Welfare Council, Jag Mohan Kumar Arora, said that the trust board and the Department of Archaeology can generate millions of rupees from these temples if they are properly preserved and opened for tourists. “The board is generating money by selling the attached pieces of land around the temples to land mafia. The board is least bothered about spending a penny on maintenance of these historical temples.”

“The government should constitute a committee on the pattern of Pakistan Sikh Gurdwara Prabandhak Committee to protect its holy sites and heritage,” said Dr Umer Nadeem Tarar, Director at National College of Arts.

“People take temples as nothing but mere buildings and they want to destroy them,” said Muhammad Yousaf, lecturer at Islamic International University. The people who understand the importance of heritage can never think about razing them, he said, adding that heritage is what defines a people’s identity and it is a page from the past. However, in Rawalpindi, heritage sites like the temples are disappearing rapidly because of negligence of authorities.