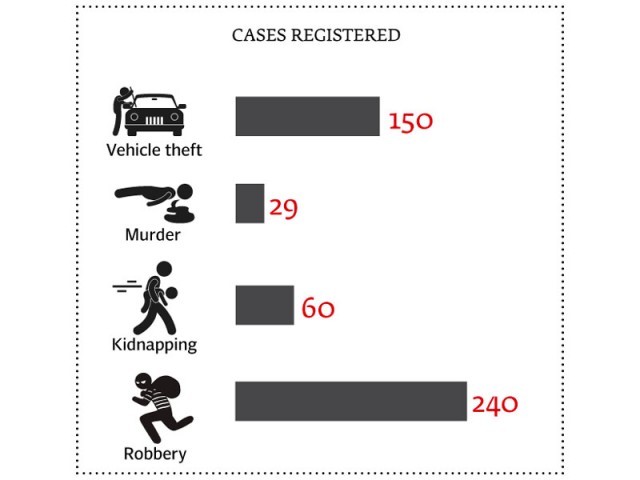 In 50 days, 600 cases of theft, murder, kidnapping and robbery were registered.

‘The greatest of faults is to be conscious of none’.  This might help us understand the rising crime in the garrison city and the apathetic unconcern of the police department toward it.

The statistics on crime in the town are appalling, to say the least. Despite registration of about 60  cases of kidnapping, the police chief of the garrison town thinks that  in most of these cases the girls either eloped and got married of their choice but police is bound to get the cases registered if the parents insist.

This probably answers why the department is slow on investigating these cases.

According to the data collected by The Express Tribune, during the first 50 days of 2014, 150 vehicles including 120 cars, and 120 motorbikes have been stolen from various parts of the district.

Besides, outlaws in 230 strikes deprived citizens of their valuables worth millions of rupees. Regional Police Officer (RPO) Umar Akhtar Hayat Lalika said that this year police to some extent managed to control vehicle theft cases. He said that in the ongoing year the number of cars stolen was less as compared to the previous year.

On the other hand, a senior police officer wishing not to be named said that the police have to take some serious measures to stop car snatching and theft incidents. “During the ongoing year, car-jackers managed to lift 150 vehicles and 120 motorbikes, which is alarming,” said the officer.

Out of the total, six cars, 15 motorbikes and five other vehicles were snatched at gunpoint. While 90 cases of burglary and 80 cases of theft were reported to various police stations besides 29 cases of murder and 55 of attempt to murder.