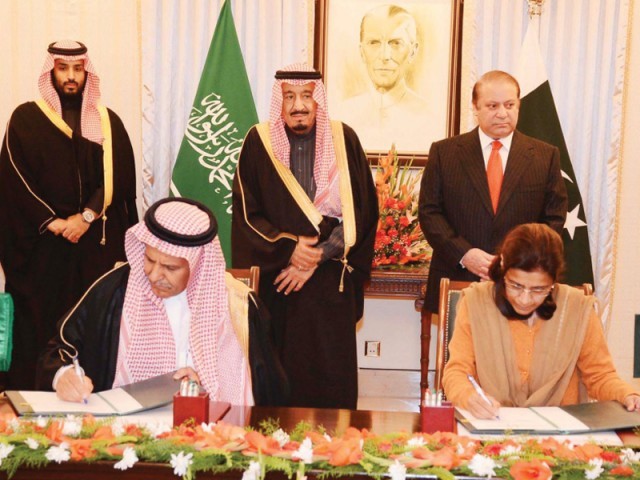 Saudi Arabia has managed to win crucial support from Pakistan in the ongoing insurrection in Syria, as the two key Muslim states on Monday called for the formation of an interim governing body to replace the Bashar al Assad regime.

Following talks between the visiting Saudi crown prince, Salman bin Abdulaziz al Saud, with Prime Minister Nawaz Sharif, the two countries demanded ‘the formation of a transitional governing body with full executive powers enabling it to take charge of the affairs of the country (Syria)’.

A joint statement issued after the Saudi dignitary’s meetings with the top civil and military leadership in Islamabad clearly suggests a shift in Pakistan’s policy on Syria. Until now, Islamabad had not taken sides in an attempt to maintain a delicate balance in its ties with both Riyadh and Tehran, which are at odds over the Syrian conflict.

Official sources told The Express Tribune that the recent flurry of visits by top Saudi officials were aimed at persuading Islamabad to support Riyadh on Syria after it lost faith in the US administration to oust Assad’s regime.

“The two sides reiterated the need for finding a quick solution to the existing conflict in Syria according to Geneva I Resolution in order to restore peace and security in Syria and prevent bloodshed of the brotherly Syrian people,” reads the joint statement.

The two sides went on to call for an immediate withdrawal of all ‘foreign armed forces and elements’ from Syrian territory. This is believed to be a reference to the alleged Iranian support to the Assad regime.

The two countries also demanded an end to the siege of Syrian towns and villages and cessation of aerial and artillery bombardment. They called for “setting up safe corridors and regions to deliver food and humanitarian aid to besieged Syrian citizens, under international supervision”.

This apparent shift in Pakistan’s Syria policy is likely to upset neighbouring Iran. Monday’s warning by Iran’s interior minister to send troops into Pakistan to secure the release of kidnapped border guards is seen as Tehran’s uneasiness over Islamabad’s warming up ties with Riyadh.

When contacted, a senior government official insisted that there was no change in Pakistan’s Syria policy. Sources, however, said that in return for supporting Saudi Arabia on Syria, Pakistan is expected to get defence contracts and other economic favours from the oil-rich kingdom.

During these meetings, the two sides agreed to strengthen their defence cooperation. However, details of their understanding have not been made public. Islamabad, according to officials, is keen to sell JF-17 Thunder combat jets and other military equipment to Saudi Arabia.

The two countries expressed their support for Afghan reconciliation and called for including all sides and components of the Afghan society for the restoration of peace and stability in the strife-torn country. They underlined support for the political process through holding the elections scheduled for April 2014.

The Saudi side expressed hope for reaching a peaceful resolution to the decades-old Kashmir dispute in accordance with the relevant UN resolutions so that it contributes to the achievement of permanent peace and stability in the region.

The Saudi side welcomed the positive developments in Pakistan-India relations, which would reflect positively in the interest of the two neighbouring countries and stability in the South Asian region.

Both sides acknowledged importance of completing necessary measures for signing of the Agreements and MoUs in different fields including Islamic Affairs and endowments, labour, manpower, sports and an agreement to encourage and protect mutual investment in the two countries.

The two sides reiterated their commitment to fighting extremism and terrorism in all its forms and manifestations and continue to cooperate in the field of exchange of security related information.