As the bullets fly: One policeman killed, another injured in roadside blast

As the bullets fly: One policeman killed, another injured in roadside blast 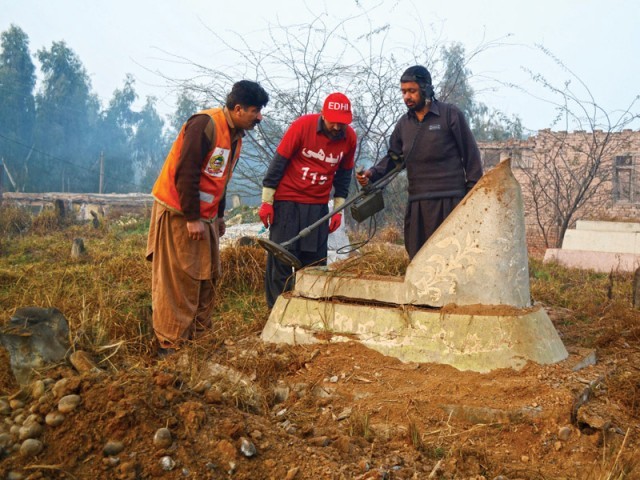 PESHAWAR: A head constable of Frontier Reserve Police (FRP) was killed while another constable was injured in a roadside blast at Charsadda Road on the outskirts of the city on Sunday morning.

The two policemen had been deployed in the area as part of the security detail for polio vaccination teams near Nishat Mills. The incident took place when the policemen were on duty and left Head Constable Bakhat Naseer dead and Constable Akbar Hussain injured.

“The device had been buried in the ground along the road probably a night before,” said a policeman from the Khazana police station. “It was probably detonated using a remote control when the men showed up for duty.” He added that both men were taken to Lady Reading Hospital where Naseer succumbed to his wounds.

After preliminary investigations, bomb disposal squad officials said around three kilogrammes of high-grade explosives were used in the homemade device.

“Bakhat Naseer was a resident of Swat and his body has been taken to his ancestral town for burial,” said the police. A search operation was launched in the surrounding areas and several arrests were made.

Sarfaraz, a policeman was left injured after a bullet hit him in the head in Charkha Khel area on Sunday.

“The official is a member of the Bhanamari rider squad and was hit most probably by a stray bullet as no one heard a gunshot,” said an official at a nearby police post. He added that the injured was taken to a hospital where his condition was said to be stable.