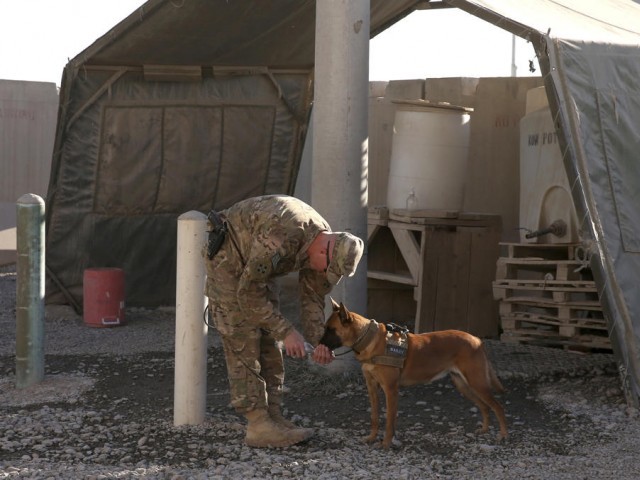 File photo showing a US soldier giving his guard dog water at the Kandahar Air Base. PHOTO: Reuters

KABUL: The Taliban say they have captured a dog belonging to the US military following a raid in eastern Afghanistan late last year.

A video posted on the insurgents’ website on Wednesday and later on Facebook shows the animal, named by the Taliban as “Colonel”, being held on a leash in a small, well-lit courtyard surrounded by five men holding guns and grenades.

Wearing a black vest with pouches for equipment, the dark brown canine wags its tail and later perks up its ears as the militants begin chanting “Allah hu Akbar” (God is greatest).

The video’s narrator says three guns, one pistol and other equipment including a GPS and a torch were seized from the dog, which was captured after a US operation in Alingar, a volatile district in Afghanistan’s Laghman province.

A spokesman for the International Security Assistance Force (ISAF) in Kabul said they were aware of the reports, but declined to comment.

Taliban spokesman Zabiullah Mujahid told AFP Thursday: “The Americans conducted an operation on the positions of Mujahideen in Alingar district (of Laghman province).

“The Mujahideen put up fierce resistance and repelled the attack…The Mujahideen seized some weapons and also a dog which we later learnt the Americans called ‘Colonel’.”

The Taliban spokesman said that “Colonel” is alive and well, adding his fate would be determined later.

Hundreds of canines have been deployed by US forces in Afghanistan for tasks such as seeking out improvised explosive devices (IED) responsible for the vast majority of both military and civilian casualties in the war-torn country.

The bravest among them are awarded medals and wounded animals are airlifted from the front line to be taken for treatment.

Dogs are seen as unclean creatures by some Muslims and viewed with suspicion by the Taliban.