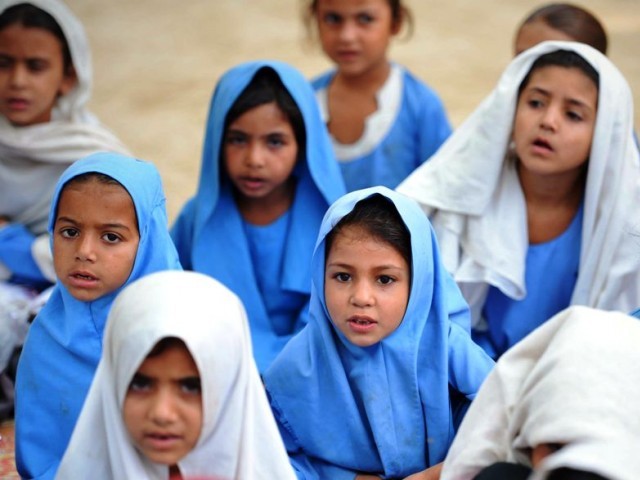 Girls attend class at a school in Mingora, a town in Swat valley, on October 9, 2013. PHOTO: AFP

The Ministry of Education, Trainings and Standards in Higher Education signed a memorandum on Thursday with Unesco to spend $7 million on improving the accessibility and quality of education for girls in remote areas.

The fiver-year plan announcement was made at a news conference held by Unesco Director-General Irina Bokova who was flanked by Minister of State for Education, Trainings and Standards in Higher Education, Engineer Muhammad Balighur Rehman.

Former president Asif Ali Zardari had pledged the amount under the Malala Fund for Girls’ Right to Education in 2012. The fund aims at raising billions of dollars to ensure that all girls of primary and secondary schools are enrolled.

Speaking on the occasion Bokova said that Unesco was “with the Pakistani government to improve the access to education while improving the quality”.

She noted that the recently launched Global Monitoring Report of Unesco in Pakistan painted a grim picture of educational standards in the country where only 43% of fifth graders surveyed could read English.

Bokova was of the view that under the agreement expanding access for girls to primary and secondary education would increase employment opportunities for female teachers in the area.

“We will try to push locals, religious scholars and the community to encourage girls’ education in remote areas,” she remarked. In response to a question about terrorism she stated that such attacks held the country and its education plan hostage.

In regard to the protection of cultural and heritage sites in Pakistan, she reiterated her organisation’s plans to stop the illicit trafficking of antiquities. “We will assist Pakistan for the protection of their heritage,” she said.

The mister of state for education commented that out of a total of $10 million, seven million dollars will be spent on girls’ education in Pakistan while the remaining three million will be spent on conflict-hit areas of Afghanistan.