First round: Talks to be held within parameters of Constitution, propose negotiators

First round: Talks to be held within parameters of Constitution, propose negotiators

Agreem­ent reache­d that the talks will apply to the troubl­ed areas only; activi­ties that disrup­t talks to be halted.
By Web Desk
Published: February 6, 2014
Tweet Email 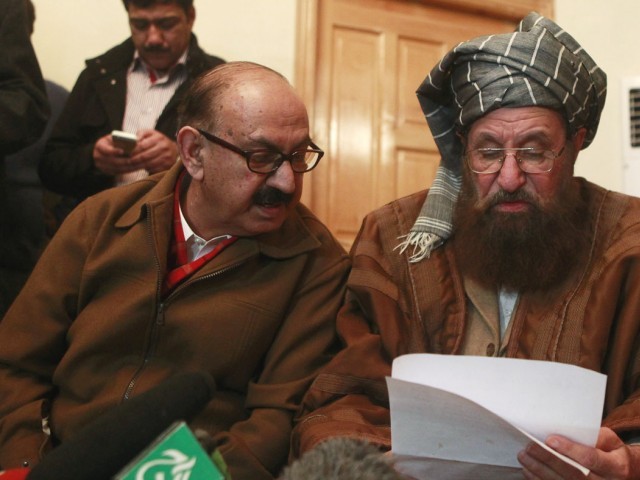 Maulana Samiul Haq (seated R), one of the Taliban intermediary, and Irfan Siddiqui, a government negotiator, discuss on a joint statement before a news conference in Islamabad February 6, 2014. PHOTO: REUTERS

ISLAMABAD: In the first round of talks between the government-nominated team of negotiators and Taliban-nominated intermediaries, it was proposed that talks will be held within the parameters of Constitution, and that the dialogue will be applicable only to the troubled tribal areas of North and South Waziristan, Express News reported.

At the end of the three-hour-long session at the Khyber-Pakhtunkhwa House in Islamabad on Thursday, a press release with the proposed terms was read out.

It was agreed that all dialogue will be held within the parameters of Pakistan’s Constitution.

It was further agreed that both sides should halt activities which could damage the peace talks.

The two delegations agreed that the dialogue will be applicable only to the troubled areas and not the rest of the country.

They also agreed that issues should be resolved swiftly and the dialogue should not be prolonged.

The government committee consisting of Irfan Siddiqi, Muhammad Aamir, Rahimullah Yusufzai and Rasool Shah Aman expressed their zeal and enthusiasm towards the start of peace talks. They said the prime Minister hopes these peace talks turn out to be a success.

The Taliban committee comprising Maulana Samiul Haq, Maulana Abdul Aziz and Maulana Yusuf Shah, on the other hand, welcomed the peace efforts and said, “We have always wanted to end the atrocities taking place in Pakistan so that people in Pakistan can live in peace.”

Meanwhile, the government wanted to meet the Taliban Shura and to have a Taliban representative included in the committee participating from the TTP sides who, at present, are ‘intermediaries’.

Asked about the point of the dialogue applying only to the troubled areas, Prof Ibrahim said that “this was the point of view of the government, the Taliban have not yet presented their stance on this.”

Prof Ibrahim added that his team wanted to directly hear what the Taliban had to say on about this point. “We are serving as facilitators and intermediaries.”

Earlier on Thursday, the coordinator of the government’s four-member committee, Irfan Siddiqui said that the government committee will negotiate with TTP with an open mind.

The state negotiators met today to discuss how to start the dialogue process and take it forward.

The TTP intermediaries and government negotiators were originally scheduled to meet on February 4. However, the government side wanted to have certain unidentified issues cleared before the dialogue process formally began.