Washin­gton Post says there had been a lull in such attack­s since Decemb­er, the longes­t break since 2011.
By Reuters
Published: February 5, 2014
Tweet Email 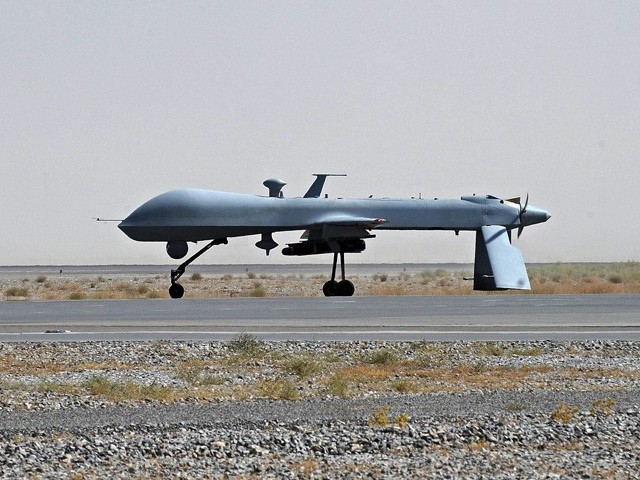 Photo of a drone. PHOTO: AFP

WASHINGTON: The United States has cut back sharply on drone strikes in Pakistan after the Islamabad government asked for restraint while it seeks peace talks with the Tehreek-e-Taliban Pakistan (TTP), the Washington Post reported on Tuesday.

The Post quoted a US official as saying, “That’s what they asked for, and we didn’t tell them no.”

The newspaper said there had been a lull in such attacks since December, the longest break since 2011. The newspaper said the Obama administration indicated it would continue carrying out strikes on senior al Qaeda officials if they were to become available or to thwart any immediate threat to Americans.

Reuters was not immediately able to confirm the report. The Post quoted a senior Obama administration official as denying an informal agreement had been reached, saying, “The issue of whether to negotiate with the TTP is entirely an internal matter for Pakistan.”

While some Pakistanis welcome the strikes, saying they kill fewer civilians and are more effective against militants than traditional military operations, others argue the strikes still cause civilian casualties, terrify residents and violate Pakistani sovereignty. Prime Minister Nawaz Sharif has said he wants the drone strikes to end.

The Post said the current US pause came after a November strike that killed the TTP leader Hakimullah Mehsud. That attack took place a day after Pakistan’s foreign policy chief Sartaj Aziz was quoted as saying the United States had promised not to conduct drone strikes while the government tries to engage the Taliban in peace talks.

An annual study by a British-based organization found that CIA drone strikes against militants in Pakistan killed no more than four civilians last year, the lowest number of reported civilian deaths since the drone program began in 2004.

Sugar-seller fulfils his dream of playing for foreign football club