Like dominos they fall: Boys school blown up in Charsadda

Like dominos they fall: Boys school blown up in Charsadda

In a separa­te incide­nt, girls school destro­yed in blast in Bannu.
By Our Correspondents
Published: February 5, 2014
Tweet Email 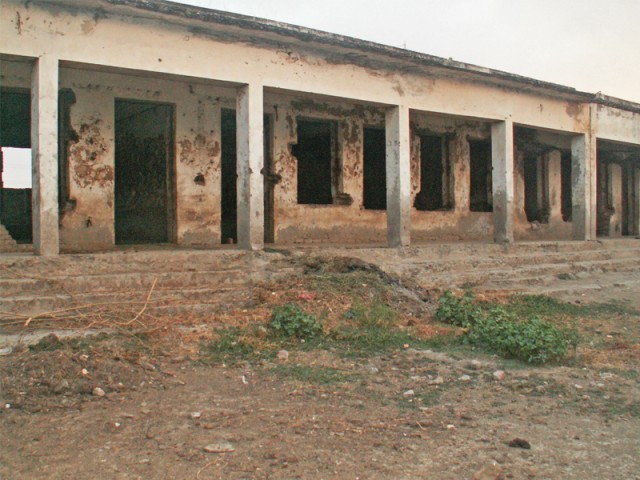 SHABQADAR / BANNU: The veranda and a room of a primary school for boys was destroyed in a bomb blast on Tuesday morning in Sro Kallay, Shabqadar tehsil of Charsadda district. A five kilogramme (kg) bomb was defused from the same site after the explosion.

According to police official Kausar Khan, unidentified people had planted five kg of explosives in an oil canister along the school’s boundary wall and detonated the explosives at 3am.

“As a result of the blast, one room of the school and a veranda were completely destroyed,” said Khan.

He added the police rushed to the site and upon inspection found another homemade bomb with similar specifications, close by. The bomb disposal squad (BDS) was called and the device was defused.

A search operation was launched in the area, however, no suspects had been arrested till this report was filed.

A dozen or so Mohmand Agency schools are functioning in Sro Kallay – located along the border of Charsadda district and Mohmand Agency.

A government-run girls primary school was destroyed when one of two bombs planted by unidentified militants exploded near the building in Miryan, Bannu.

According to DSP Headquarters Sanaullah Marwat, the incident occurred in the early hours of the morning. Militants had planted two bombs near the boundary wall, Marwat added. One of the devices was detonated by remote, creating panic in the area.

After the explosion, Miryan police rushed to the site, surrounding the school. The BDS was called in; they confirmed at least five kg of explosives had been used in the bomb. BDS defused another explosive device which had been planted towards the back of the school.