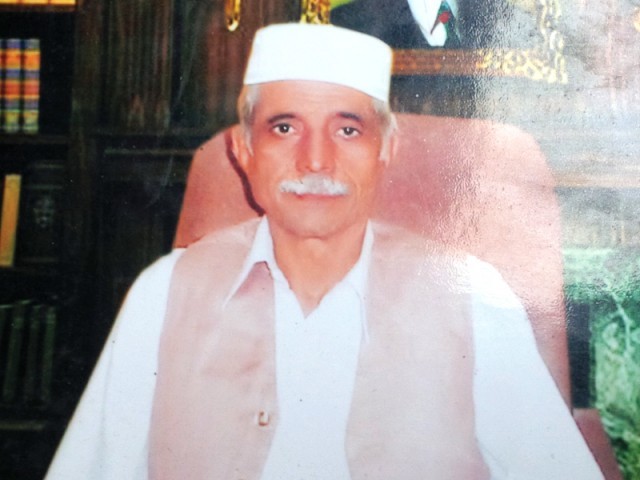 His house is a narrow building split into portions for three families residing there. Situated at Gulshan Ravi, it faces an open sewer canal. Children of the area play in the trash that litters the banks of the canal. It stands in stark contrast to the elite neighbourhood it shadows.

He was one of a kind. Naseer Humayoun, a veteran trade unionist, passed away earlier this month at the age of 60, an activist who spent nearly 48 years of his life fighting for the rights of railway workers in Lahore.

Humayoun worked for Pakistan Railways. He joined in 1967 on the encouragement of his father who worked there before him. He was employed on contract to move coal and fix air conditioners. Within eight days of him joining, there was a workers’ strike. “From day one he was involved in fighting for workers’ rights,” Zaheer, his younger brother, says.

Humayoun first joined Pakistan Railways Workers Union (PRWU) and then the National Workers Party (NWP) in 1971. It was led by Mirza Ibrahim, a neighbour, close friend and a great political influence. When they decided to contest elections, they formed an alliance with the Pakistan Peoples Party.

Humayoun worked as a fund raiser and information secretary of PRWU and later the NWP. “Every month, when they got their salaries, Humayoun would sit outside with a box,” Zaheer says. “Workers would come in large numbers to donate.”

Both his political comrades and his family remember Humayoun’s uprightness in matters of money. “When I asked him to bring me candy from the funds he collected, he would give me a stern look and remind me that it was not our money, it belonged to the workers,” says Tasim, his daughter.

Humayoun conducted a reading circle for railway workers who could not read. “Every day he would read out news stories and columns to the workers,” Zaheer says. “They would sit with him in groups and he would read out passages to them.” His family also pointed out Humayoun’s favourite spot on a step at the end of his street, where he would read the newspaper everyday and engage the residents of his neighbourhood in political debate.

Between 1973 and 1976, Humayoun was incarcerated after a clash between two splinter groups within the Railways union. Furthermore, life under dictatorial regime was not easy. “Humayoun went through suspension, threats of termination, tear gas and baton charges,” says Farooq Tariq, general secretary of Awami Workers Party (AWP).

This was also the time when Humayoun’s love for poetry developed, particularly the kind that was able to articulate Pakistan’s social and political milieu. “When he was in prison in the 70’s, his cell was next to Faiz Ahmed Faiz’s cell,” says Zaheer. “He told us many stories of their friendship.”

Tasim, his daughter, a mother of a four-year-old, remembers, “When I was a little girl, my father used to make me sit in his lap and recite poems.” She says his favourite poem was Hum Dekhein Gey by Faiz.

Humayoun married in 1980. Later he joined the Movement for Restoration of Democracy (MRD) in 1981. A populist left–wing political alliance, the MRD was headed by Benazir Bhutto. Tariq says in 1981, Humayoun was among those tasked with bringing Begum Nusrat Bhutto from Karachi to Lahore safely. “I cannot explain how hard a task it was. But somehow Humayoun managed it.”

Humayoun sought an early retirement from Pakistan Railways in 2001.

“It was very difficult in the start to adjust to a life of struggle,” says Farhat Bibi, his widow. “But I knew that this was his life, he knew no other way.” Farhat realized how loved he was when nearly a 100 people showed up for his funeral and dozens others visited her to offer condolences.

Ali Jan, member of the AWP Lahore Committee, spoke about Humayoun as an organic intellectual. “In the absence of formal academic training, he articulated political ideology through everyday acts,” Jan says.