Altaf Ahmad sings songs for his parent­s who are in Indian Kashmi­r.
By Our Correspondent
Published: January 26, 2014
Tweet Email 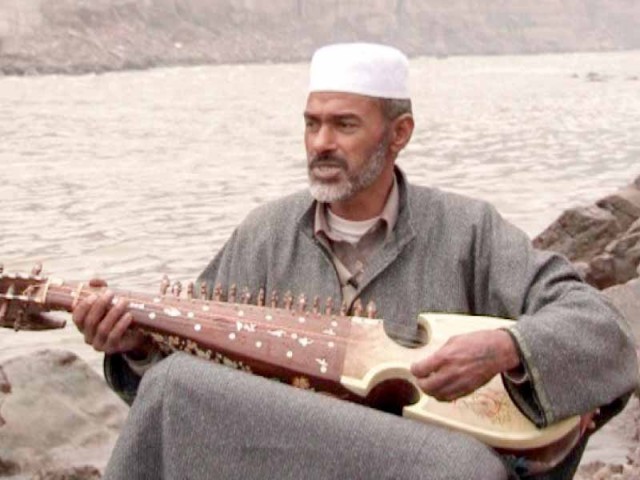 Altaf Ahmad sings songs for his parents who are in Indian Kashmir. PHOTO: EXPRESS

As a pall of gloom descends on the people of Kashmir on Jan 26, the day India celebrates its Republic Day, Altaf Ahmad sits on the banks of the River Jhelum and sings folk songs. Just as other Kashmiris mourn the day, he shares his agony with the river — which is supremely important to so many others from the divided territory.

It is the common thread between him and his family that has been separated by man-made borders. The river’s waters flow both sides of the border. “It flows near my house in occupied Jammu and Kashmir, and when I miss my mother I come to sit on the bank of the River Jehlum and sing these songs to refresh her sweet memories.”

Altaf is one of those who migrated from Indian Kashmir to Muzaffarabad and is now settled in a rented house in Gharipan, close to the river Jehlum. To keep the emotional ties with his motherland intact, Altaf often sits on the bank of the river in Muzaffarabad and sings the song to refresh the memories of his parents who are still in Indian Kashmir.

In 1989, when the people of Indian Kashmir started their armed struggle against the Indian occupation, thousands of people migrated from Indian Kashmir to Azad Jammu and Kashmir (AJK). The special powers given by New Delhi to its armed forces to crush the freedom movement forced hundreds of youth and families to leave the area.

“I know my mother regularly fetches water from the river Jehlum in occupied Kashmir and her pitcher would have definitely touched the same water flows near me here which gives me immense pleasure and carries me back to my childhood,” said Altaf who is from Islamabad, in Anantnag.

Besides the local people, Kashmiri refugees especially enjoy the Kashmiri folk songs sung by Altaf on the picturesque banks of the river. “No doubt, Altaf’s songs are a source of entertainment for the divided families of Jammu and Kashmir. Most importantly, we love to listen him to remain in touch with our roots and motherland,” said Mushtaqul Islam while talking to The Express Tribune. Mushtaqul Islam is also a Kashmiri refugee settled in Muzaffarabad who is among Altaf’s fans.

“His songs are full of pain, grief and sorrow but the other side of his singing is a source of encouragement for the divided families of Jammu and Kashmir like me. His songs motivate us to remain committed to the freedom movement of Jammu and Kashmir,” said Hamid Kashmiri. Kashmiri had also migrated from Srinagar to Muzaffarabad in the early 1990s.

Local trader Lala Mustafa said: “We know Altaf is trying to highlight the miseries and sufferings of the people of occupied Kashmir through traditional Kashmiri songs. “My father was forced by the Indian army to leave Baramulla in 1947. I can relate to the pain of Ahmad who is here on the banks of the river Jehlum, paying tribute to his heritage and remembering his mother through singing these songs. The Kashmir issue is a stain on the face of India.”