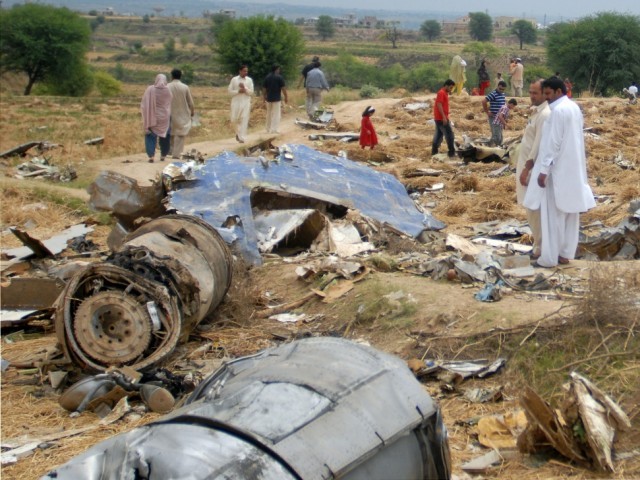 KARACHI: The evening flight was a routine affair for Captain Noorullah Khan, 58, even if there was a thunderstorm warning for the city where the plane headed. A former Pakistan Air Force (PAF) pilot, he had 10,158 hours of flying experience behind him.

It was a Friday on April 20, 2012. The Bhoja Air flight BHO-213 took off from Karachi for Islamabad at 5:05pm with 127 people onboard including six crew members.

It was the first evening flight in 11 years since Bhoja suspended operations in 1999. The airline had resumed service a couple of months back under the new ownership of Arshad Jalil, a former Managing Director of Shaheen Air International.

The plane was one of the four Boeing 737 inducted in the fleet. It was a 737-236a – an advanced version of the 737-200 – manufactured in 1985 and purchased by British Airways, which used it till 1999. Then it served in South Africa’s Comair till the end of 2010 when it was grounded as the airline switched to another model.

All relevant checks and approvals were obtained when Bhoja bought it in January 2012. On the 12th of that month, Pakistan’s Civil Aviation Authority’s inspectors Shaukat Hameed and Javed Afzal undertook a detailed inspection of the aircraft at Johannesburg.

They pointed out 28 discrepancies, which ranged from peeled-off paint to a fan blade of one engine sporting a cut. They also examined the waviness of the blade. All defects were removed in following weeks.

And so at 6:09pm the plane was in the air somewhere above Lahore. Inside the cockpit, Khan was assisted by 53-year-old first officer (FO) Javaid Ahmed Malik who was also ex-PAF pilot.

The two men were considered very close. They had worked in Shaheen and then moved to Bhoja together. As a matter fact, out of 23 flights the Captain took at Bhoja, the FO was his co-pilot in 16 of them.

Khan was a fatherly figure for Malik, who had performed very well in PAF as a cadet. But during his initial flying experience, he suffered airsickness, which scarred his confidence for the rest of his career.

The captain left Shaheen after he was dropped from a ground training programme for B 737-400 aircrafts as the management felt he won’t be able to manage the automated flight deck system efficiently.

The automated flight deck system is slightly more advanced than the semi-automated ones and needs different treatment, especially when the aircraft encounters adverse weather condition.

Captain Khan was not properly trained to handle the situation on such systems whereas his first officer never received simulator training for the B 737-236a variant, which has an automated deck.

Exactly at 6:18:17, the FO asked Khan if he should take the weather forecast for Peshawar. The captain said there was no need. Every flight has two alternate cities marked in case the plane needs a diversion. In this instance, they were Lahore and Peshawar. But the pilot seemed to have made up his mind to land at Islamabad.

There was thunderstorm activity over Islamabad with wind speeds between 20 and 34 knots. The environment was rife for downburst and wind-shear, which causes drastic changes in wind speed and direction over a short distance and altitude.

The captain realised how bad the weather was at 6:19. At 6:24, the captain explains to the FO about the squall line, which basically means bad weather. Over the next few minutes the cabin crew discussed the situation outside.

The radar controller told them at 6:28 that there was a gap between radials 160 to 220. That meant there was small space for the aircraft to pass through the stormy clouds.

At 6:31:08, the FO asked the captain to take a right to avoid the bad weather. “No, no we don’t have to go there, we have to land here,” replies Captain Khan who was determined to land.

After that the crew became relaxed for a while.

The tower clears the flight to descend at 6:33. Autopilot and auto throttle are engaged at 6:35. At 6:37 the captain commented on the darkness. They knew they were near bad weather but did not change course, which they should had done as per the flying manual.

By 6:38:10, the landing gear was down and the aircraft was arranging itself with the localiser, an imaginary line which helps guide it towards runway.

Flight BHO-123 had entered the last two minutes of its life.

“What?” the captain shouted. The information is repeated. “220…oh shit what has happened?”

The captain knows that the auto throttle speed should not have exceeded 190 knots. He couldn’t correlate this variation with the presence of wind shear.

Precipitation, rain or hail lashing the aircraft frame, started at 6:38:37pm. The aircraft was taking the final approach.

By 6:39:16pm, a descending air mass had pushed the plane in downdraft, a rapid downward push of air. The speed being maintained by auto throttle was not enough to get out of the situation. In this situation pilots are trained to do just one thing: apply full throttle manually and get out.

According to a senior pilot this is the time when passengers were exposed to havoc. “Everything must be flying inside.”

A second later the FO shouted, “Go around, go around.”

From then onwards the plane was flown manually but auto throttle still controlled the thurst.

The Terrain Awareness Warning System blared ‘whoop’ sounds. The FO was busy contacting the control tower. That is when he should have taken over control from the Captain as they are trained to do under Crew Resource Management courses.

Three seconds later he said his last words: “Go around, go around sir, go around.”

The Bhoja aircraft crashed 4.5 nautical miles from the Islamabad airport near Hussainabad village. No one survived.

The cockpit crew conversation and findings are part of a 78-page investigation report which was spearheaded by CAA. It ruled out any sort of technical failure in the aircraft. Possibility of sabotage or bird hit was also discounted.

The radar controller has also been declared innocent. It has been found there was no way he could have known that there was wind shear.

One reason for the cockpit crew’s failure was the wrong induction of pilots for B 737-236a aircraft, it said. Bhoja’ management did not have a cockpit crew monitoring system at all.

The most astonishing part of the report is how CAA exempted its Flight Standard Directorate from any responsibility. CAA never objected to the pilots because it was never told by Bhoja that they would be flying advance version of B 737-200.

How these two inspectors overlooked what kind of an aircraft it was before clearing it remains a mystery.