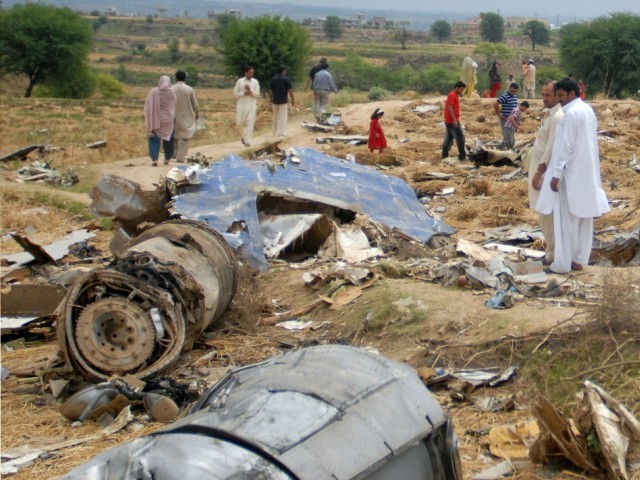 It was the first evening flight in eleven years since Bhoja Airways suspended operations in 1999. The airline resumed service twelve years later and this flight from Karachi to Islamabad was scheduled for Friday, April 20, 2012. A 78-page report released by the CAA includes a blow-by-blow account of BHO 213’s final minutes before it crashed on that Friday, ruling out any technical failure in the aircraft.

There was a thunderstorm warning for Islamabad but the flight’s captain, Noorullah Khan was not perturbed – with more than 10,000 hours of flying experience under his belt, this was just another routine flight for the former air force pilot, aged 58. Flight number  BHO 213 departed from Karachi at 5.05pm, with 127 people on board, including six crew members. Khan was assisted by 53-year-old first officer (FO) Javaid Ahmed Malik, also a former PAF pilot. The two pilots had worked together previously and of the 23 flights the captain piloted at Bhoja, Malik  had co-piloted 16.

Bhoja Airways, under the leadership of former Managing Director of Shaheen Air International Arshad Jalil, had inducted four Boeing 737s to its fleet. This plane, a 737-236a was manufactured in 1985 and used by British Airways till 1999. The plane served South Africa’s Comair until 2010 when it was grounded. The 737 was purchased by Bhoja in January 2012 and on January 12, Pakistan’s Civil Aviation Authority’s inspectors Shaukat Hameed and Javed Afzal carried out a detailed inspection of the aircraft in Johannesburg. The inspectors noted 28 discrepancies, ranging from peeled-off paint to an engine fan blade’s waviness. All defects were removed in following weeks.

The CAA’s report notes there was no cockpit and crew monitoring system within the airline. The CAA’s Flight Standard Directorate is exempted from any responsibility, as the CAA says it was never told by Bhoja that the pilots would be flying an advanced version of the B-737-200 – the aircraft, possessing an advanced automated flight deck system, requires different treatment when encountering adverse weather conditions. Captain Khan was not trained to handle the situation and his FO had not received simulator training for the aircraft’s automated deck.

At 6.09pm, the report notes, the plane flew above Lahore. At 6:18, the FO asked Khan if he should request a weather forecast for Peshawar – every flight has two alternate cities marked in case of diversion and in this case, it was Lahore and Peshawar. The captain said there was no need. A thunderstorm loomed over Islamabad, with wind speeds at 20 and 34 knots. At 6.24, the captain commented to his FO about the bad weather and at 6:31, the FO asked the captain to take a right to avoid the inclement weather. “No, no we don’t have to go there, we have to land here,” replied Captain Khan, determined to make it to Islamabad.

The flight was cleared for descent at 6.33. Four minutes later, the captain commented on the dark weather but by 6.38, the aircraft prepared to land. Flight BHO-123 then entered the last two minutes of its life. At 6.38, the FO informed the captain that the speed was 220 knots – when at this point, it should not exceed 190 knots. By 6.39, the plane was pushed into a downdraft – a rapid downward push of air. Within four seconds the plane fell from 1900 feet to 900 feet. According to a senior pilot, ‘everything must have been flying inside’ the cabin at this point. By 6.39.28, the captain can be heard shouting, “No, no!”, while the FO says, “Go around, go around.” The Terrain Awareness Warning System sounded an alarm and the FO contacted the control tower. At 6:39:54, the FO shouted, “Stall warning, let’s get out.” Three seconds later, he says his last words, “Go around, go around, sir, go around.” The aircraft crashed 4.5 nautical miles from the Islamabad airport near Hussainabad village. There were no survivors.