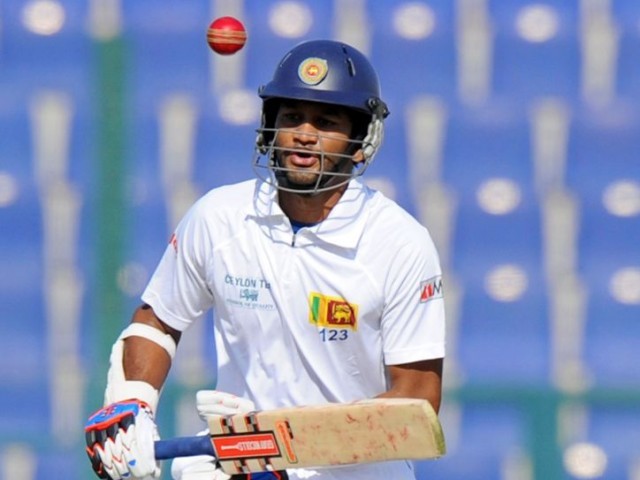 SHARJAH: Sri Lanka, who won the toss and batted, closed the opening day of the third and final Test against Pakistan at 220-5 in Sharjah on Thursday.

Skipper Angelo Mathews was unbeaten on 24 and with him was Prasanna Jayawardene who was 28 not out.

Sri Lanka lead the three-match series 1-0 after their nine-wicket win in the second Test in Dubai. The first Test had ended in a draw in Abu Dhabi.

For Pakistan Saeed Ajmal was the pick of the bolwers with 2-62.

Paceman Mohammad Talha had Silva caught behind off a sharp outgoing delivery before Dimuth Karunaratne (34) and Kumar Sangakkara (12) batted comfortably on a flat pitch.

Talha, one of three changes in Pakistan’s line-up, forced an edge off Silva in his second spell to leave Sri Lanka 31-1.

Left-hander Karunaratne has so far hit two boundaries and a six off 91 balls.

Pakistan had brought in Rehman, Talha and Azhar Ali in place of Rahat Ali, Bilawal Bhatti – who was ruled out due to a hamstring injury – and Mohammad Hafeez.

Truth won in the case against me: Zaka Ashraf