Sends floral wreath that was laid at his grave in a solemn ceremo­ny.
By Our Correspondent
Published: January 12, 2014
Tweet Email 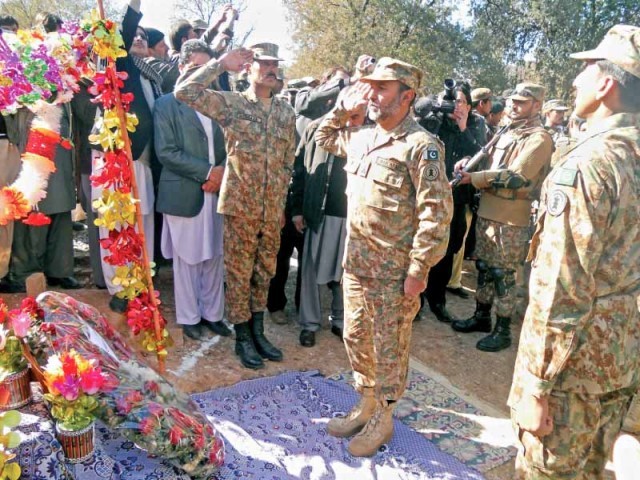 Terming his sacrifice as “the highest act of bravery”, Chief of the Army Staff General Raheel Sharif on Saturday heaped praise on Aitizaz Hasan, the 15-year-old who lost his life while foiling a suicide attack at his school in Hangu.

“It is a sterling example of bravery and sacrifice by a lad of only 15 years,” said the army chief in his condolence message according to a statement issued by Inter-Services Public Relations (ISPR).

“The nation is proud of this young hero who saved the lives of hundreds of his class mates and established himself as symbol of bravery, honour and patriotism not only for his school mates but for the entire nation,” the statement said.

The army chief also sent a wreath of flowers, which was laid at the boy’s grave on his behalf by Brig Nadeem Zaki Manj, the Local Commander in Hangu. Flowers were also laid at the grave on behalf of the corps commander Peshawar and the inspector general Frontier Corps.

Army troops also presented a guard of honour at the grave to salute the bravery of the teenager. The forces officials then went to the house of the deceased and offered his sympathies with the bereaved family.

The officials told his family that the army chief had sent recommendation to the chief secretary to award Aitizaz with Tamgha-i-Shujaat and voiced hope that central government would soon make the announcement.

Aitizaz’s father Mujahid Ali said that he and his family were proud of the valour and sacrifice of their son who protected the lives of hundreds of students.

“We are thankful to Pakistan Army for expressing its condolences,” he said adding that despite the national and international media coverage, no government official or public representative from Hangu had bothered to express their condolences with him.