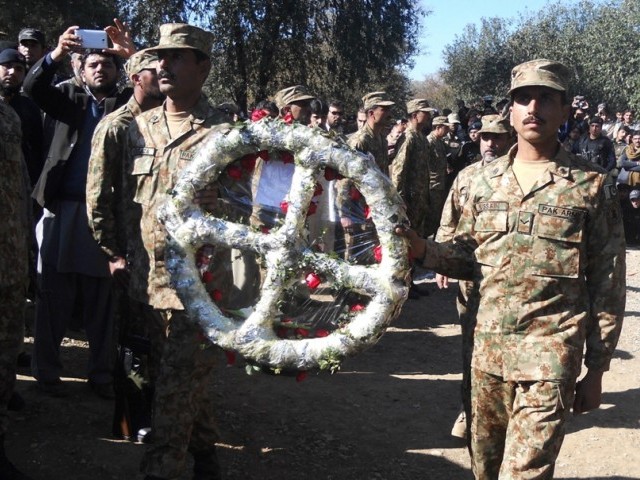 Members of the Pakistani army ceremonial guard place a wreath of flowers on the grave of student Aitzaz Hassan in Hangu. PHOTO: AFP

ISLAMABAD: As Aitizaz Hasan a teenager who sacrificed his life to stop a suicide bomber, saving the lives of hundreds of students, has been honoured with the country’s highest award for bravery.

An official from the PM house told AFP on Saturday that Hasan’s family is expected to receive the posthumous award on March 23, Pakistan’s national day following the president’s ceremonial approval.

“Shaheed Aitzaz’s brave act saved the lives of hundreds of students and established a sterling example of gallantry and patriotism,” read a statement issued by the PM house late Friday.

Pakistan army soldiers presented the guard of honour at the grave on Saturday, while hundreds of students were seen praying for Hassan in the morning school assembly.

“We are proud of him, he saved our lives, we will remember him forever,” a student from Hangu told reporters.

Ode to Aitizaz questions where Imran Khan’s ‘thekedaars’ are hiding

As legislators in the K-P Assembly shied away from lauding the hero, an admirer of young Aitizaz Hasan read out a poem asking what the so called loyalists of the nation were hiding behind now.

Below is an Urdu transcription together with an English translation of the poem:

Martyrdom found its way to Aitizaz,

A colossal honour bestowed at a tender age,

A soldier’s sacrifice for his people,

A martyr’s unparalleled service to his nation,

He erased evil with a single act,

An immense victory for a mere youth,

Those who claimed to be with him never arrived,

I say, where are those known for their heroic sixes?

I ask, where are those known to roar like lions?

The so-called admirers of Malala, where are they?

Where are the talking heads always there on TV?