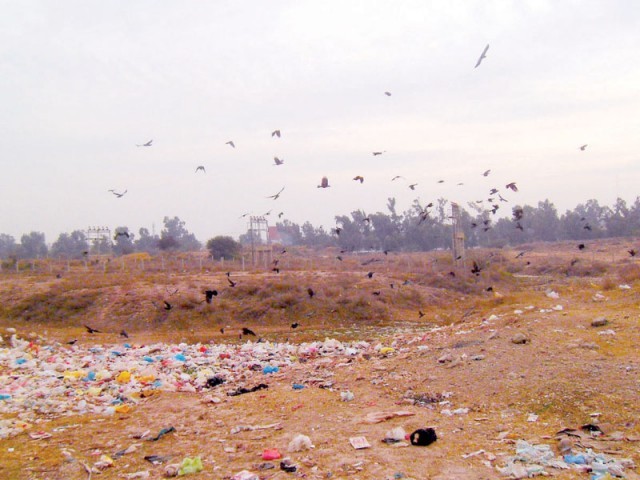 Garbage dumps near the airport attract many scavenging birds, which in turn hit planes and force them to make emergency landings. PHOTO: KASHIF ABBASI

RAWALPINDI: After yet another aircraft was grounded at Benazir Bhutto International Airport (BBIA) after hitting a bird, the Civil Aviation Authority (CAA) pointed out six major garbage sites in the area around the airport which have become major sources of attraction for scavenging birds.

The open space right in front of the runway in particular is posing a serious threat to flight safety, with dozens of small and large garbage dumps set up here.

A large number of scavenging birds can be seen hovering over the garbage here, presenting serious hazards to aircraft during taking off from BBIA.

“On December 8, an Airbus A340 was hit by a bird while landing, damaging one of its engines. Due to this, we had to ground the plane,” said Engineer Ghulam Mohiuddin Satti of Airblue.

According to sources at the CAA, dozens of incidents have been reported in which birds damaged the engines of various aircraft during take-off and landing.

Bird strikes are a significant threat to flight safety and have caused a number of accidents with human casualties around the globe.

After the December incident, the CAA conducted a survey, pointing out six major dumping sites. According to the survey report, much of the area outside the airport just beyond the runway has been turned into garbage dumps by the locals, which attract the birds.

The document further stated that the northern section of the airport near Lehtrar Road, and the PAF Jinnah Camp also has a large amount of of garbage dumped around it. The same applies to the area near Airport Housing Society on Islamabad Highway.

“A huge garbage dump was spotted close to the railway bridge, where hundreds of birds could be seen. Meanwhile, piles of garbage were observed close to Khanna Pul, Dr Qadeer Khan Road and PAF Falcon Complex,” the report said.

Civil Aviation Authority (CAA) Spokesman Mubarak Shah confirmed that dozens of birds have hit planes over the years. He said, “Birds pose a safety threat to planes. The impact can be dangerous. This is why during the last week, we wrote to the authorities to remove dump sites from the airport’s surroundings,” he added.

He said that after taking the survey report into consideration, the Rawalpindi municipal services executive district officer (EDO), solid waste management district officer, city district government and other concerned departments have been asked to remove the garbage.

Despite repeated attempts, the Rawalpindi district coordination officer (DCO) could not be approached for comment.

Back on the agenda: PM constitutes body for HEC chief’s appointment