Five police­men have been gunned down in the city in the first five days of the new year.
By Our Correspondent
Published: January 6, 2014
Tweet Email 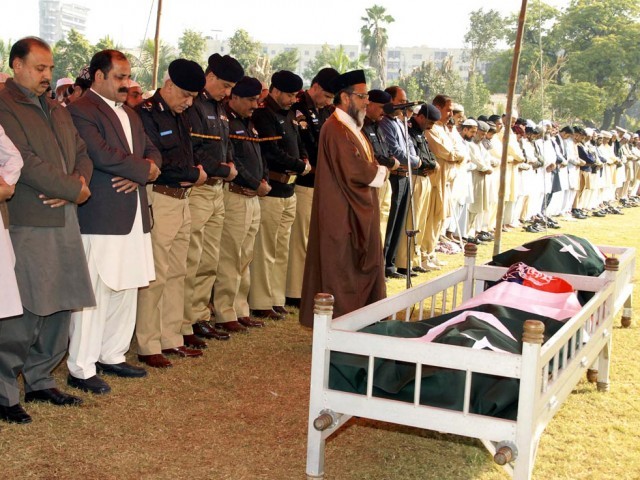 KARACHI: Two more policemen lost their lives in a drive-by shooting on Sunday when the department was already busy arranging the funeral of two personnel who were killed a day earlier.

Sunday’s targeted attack took place in Sector J of Baldia Town’s Madina Colony at around 12:30pm. A battery shop owned  by an Awami National Party (ANP) leader Abdul Razzak Buneri was bombed and fired at by unidentified men. Two policemen were wounded in the attack and were taken to Civil Hospital, Karachi, where they succumbed to their injuries. The ANP leader, Buneri, remained unhurt as he was not present when the shop was attacked.

The deceased policemen were identified as Abdul Raheem and Khan Mohammad. The witnesses said that the attackers, on motorcycles, first hurled a hand grenade and later resorted to indiscriminate firing. The shop was damaged in the blast. “There was no time for the policemen to retaliate,” said one of the witnesses. “They also took the official submachine guns (SMGs) of the deceased policemen along with them while fleeing.”

Buneri is a senior leader of the ANP and had contested for PS-91 seat in the provincial assembly in the last general elections. This was the fourth attack on Buneri.

ANP and the police believed that the same group of the outlawed Tehreek-e-Taliban Pakistan (TTP) is behind the series of attack on Buneri. The ANP leader was given police protection about five months ago when the attacks started to happen. Buneri has been threatened by the TTP to leave the party and pay the extortion money. “I avoid going to my shop because of the threats,” he said. “I have informed the police officials several times but the law enforcers have been unable to make the arrests and stop the attacks.” ANP Sindh chapter chief Shahi Syed demanded the law enforcers to arrest the culprits behind frequent threats and attacks on Buneri and other party workers. “Who is going to provide us protection?” Syed questioned. “Why are we being compelled to take weapons into our hands. If we take any [harsh] step now, the federal and provincial authorities will be responsible.”

The police officials also alleged that the TTP militants are behind the attack. “How can we be relaxed when our jawans [youths] are being killed? Baldia division SP Malik Muhammad Ehsan said, while talking to The Express Tribune. “We will arrest them (terrorists) and will  punish them at any cost.” However, no case has been registered.

A passerby was also killed in the same attack. Police officials claimed that TTP men were behind this incident as well.

After failing to catch the culprits behind the law enforcers’ killings, the Karachi police have announced Rs1 million for anyone who provides the culprit’s information.

The city police chief said the identities of the informers will be kept a secret and they can approach him and zonal DIGs without any fear.