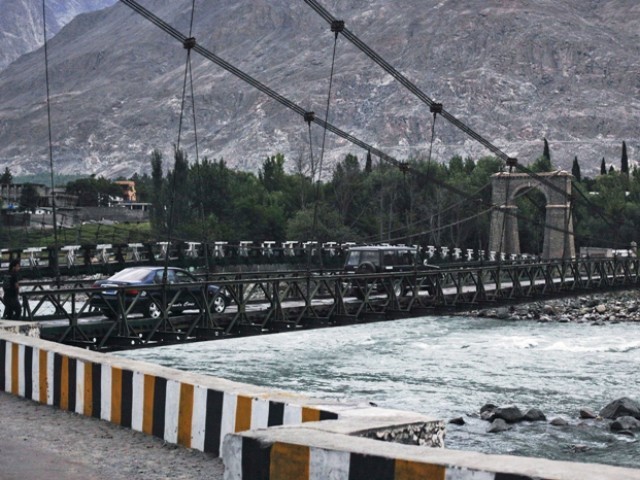 Nagar Valley, located north-east of Gilgit town along the Karakoram Highway, has lost much of its built heritage over the years and almost all its once-majestic forts.

“The loss of historic forts isn’t just a loss of buildings, it’s much more than that,” says resident Ismail Nashad who, under the banner of Anjuman Fikr-o-Sukhan, is striving to restore the forts. “We have lost precious heritage, that which belonged to our ancestors.”

Nashad is weary of the indifference of people, especially that of elected representatives.

“I had what seemed like fruitful meetings with top officials in the past about fort restoration. However, I failed to secure funds, mainly because of lack of cooperation from the locals,” he adds.

Not two of a kind

In a jarring dichotomy, Hunza Valley, which lies adjacent to Nagar, has not only preserved its forts, but has also transformed them into a source of revenue generation.

In Hunza, the community is more organized than any other community in G-B, in a large part due to the Aga Khan Development Network that has established schools and other institutions.

The forts in Hunza were renovated by Aga Khan Cultural Support Programme [AKCSP].

This programme was unable to renovate forts in Nagar because they were no more when its operations commenced.

Hunza and Nagar form Gilgit – Baltistan’s Hunza-Nagar district – the sixth of seven districts in the province. Both valleys were independent princely states until G-B announced its accession with Pakistan in 1947.

The ancient Altit and Baltit forts in Hunza have won numerous awards, including the Tourism of Tomorrow Award, and Asia-Pacific Heritage for Cultural Conservation- Award of Excellence (UNESCO). They have become a sustainable source of income for the locals.

In the famous Anglo-Brusho war, fought between locals and the British during 1891, it was the Nilt Fort that withstood for days the onslaught from a far superior army.

In his book, Where Three Empires Meet, English author E F Knight spoke highly of the Nagarians valour and exclusively of the Nilt fort.

Today, it is not just the Nilt that has disappeared – Maiun Fort, Chaprote Fort, Thol Fort and Pisson Fort have also followed suit.

While the importance of these assets may not be understood by locals, even successive governments have seemingly refused to pay heed to renovation urgencies. This has deprived the region of its previous heritage and potential sources of income.

However, Sadia Danish, tourism advisor, says tourism is a top priority of the government, and the renovation of important buildings is a part of the plan.

“This is something we are very concerned about,” she claims. “We do have a plan now to revamp all forts and historical places in the region to attract tourists.”

And yet, all that has been done so far is the placement of a signboard and that, too, erected recently for the foreign delegates interested in the silk route festival along the KKH, briefly informing them of what happened in 1891 war.

The Nilt Fort site is easily overlooked by travelers, even though it is easily accessible on the way to Hunza from Nagar.

Similarly, running parallel to the highway and across the river, a considerable portion of the ancient Silk Route is still intact. It is being used only by the locals. There are no efforts to draw in tourists.