Resumi­ng at 327-4, Pakist­an adds anothe­r 56 runs before losing their last six wicket­s to take their lead to 179.
By Our Correspondent
Published: January 2, 2014
Tweet Email 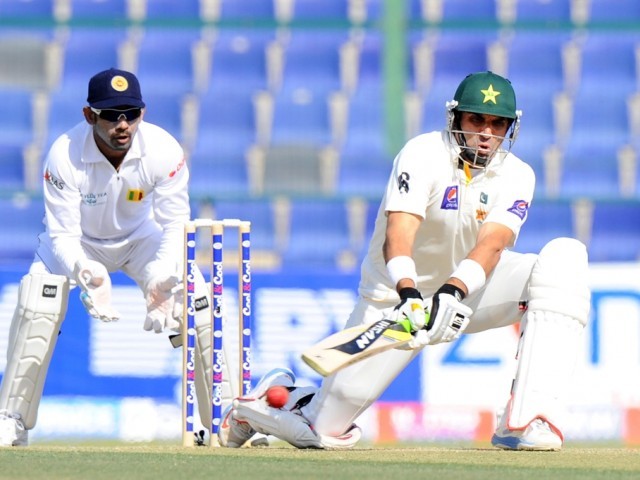 Batsman Misbah-ul-Haq (R) plays a shot as Sri Lankan wicketkeeper Prasanna Jayawardene (L) looks on during the third day of the first cricket Test match between Pakistan and Sri Lanka at the Sheikh Zayed Stadium in Abu Dhabi on January 2, 2014. PHOTO: AFP

KARACHI: Sri Lanka displayed a better batting performance in their second innings but Pakistan continued to dominate the first Test after the third day at the Sheikh Zayed Stadium in Abu Dhabi.

At stumps, Sri Lanka were on 186-4, seven runs ahead of Pakistan.

Silva, who looked well set, lost his wicket off Junaid Khan in the last over to give hosts a breakthrough.  Junaid who took a five-wicket haul in first innings took two for 46 while Bilawal Bhatti was also impressive with his figures of 2-65.

Earlier, Pakistan could add just 56 runs to their over night score of 327-4 as they lost their last six wickets to end their innings at 383 runs. Captain Misbahul Haq (135) was the last man to fall as the hosts got little contribution from the tail.