Beat-droppers: Dynoman, an underground king who rocks the dance floor

Beat-droppers: Dynoman, an underground king who rocks the dance floor

In 2012, he releas­ed his first album, Naubah­ar, a mix of electr­o pop and easter­n music.
By Tooba Masood
Published: January 1, 2014
Tweet Email 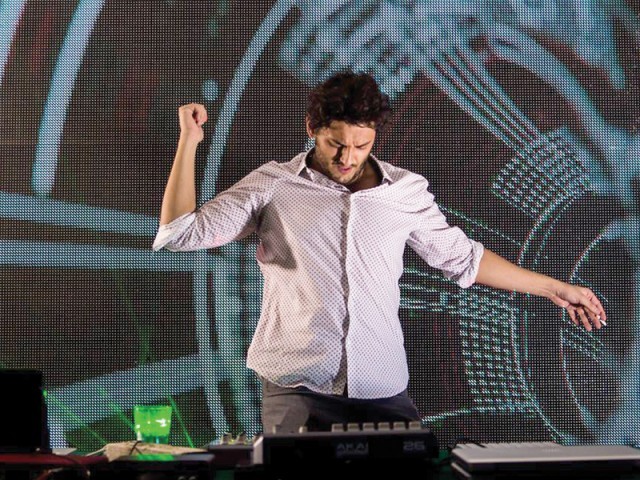 In 2008, Rahim left for university. This is where he was introduced to the Chemical Brothers and electronic music. “I used to listen to Radiohead, Postal Service and indie pop stuff, but after I got into dance music I started mixing and producing it too.” PHOTO COURTESY FAHD ZIA/ CAMERAWALLA STUDIOS

There was a time when live music sessions were a big thing in Karachi – there were regular underground gigs and almost everyone was in a band. Today, the city seems obsessed with Bollywood dance numbers and Billboard toppers on the radio.

Haamid Rahim, alias Dynoman, is an electronic music producer trying to do something different. For more than a year, the 24-year-old has been on a mission to change the music scene in Karachi and he has a lot on his plate.

His kind of music

Rahim drops strangely heartstring-tugging electro tracks – an electronic fusion of Eastern and Western music. In 2012, he released his first album, Naubahar – an interesting mix of electro pop and Eastern music.

He got involved in music at a young age. “I wanted to play the guitar because my brother wanted to play the guitar. I guess I was like his chamcha,” he said. “In the beginning we weren’t really allowed to play instruments – my brother and I were nerds who used to geek out on comic books, so our parents thought it was just another two-month phase.” He added that his parents eventually gave in and while his brother did get over it, he just got more hooked.

He started jamming after school and met future band mate Faiz Zaidi. Together, they played in a band till A’ levels. “Then the scene died and the band died,” he said. “Faiz and I continued to jam and we started this online thing focusing on the blues. We were writing tracks and music. It was our own thing.”

In 2008, Rahim left for university. This is where he was introduced to the Chemical Brothers and electronic music. “I used to listen to Radiohead, Postal Service and indie pop stuff, but after I got into dance music I started mixing and producing it too.” By the time he was in sophomore year, he was making more beats but didn’t show them to anyone.

“I came back to Karachi in 2009 or 2010 and was trying to find out where my sound fit in,” he said. “Then I came across Karachi Detour Rampage (KDR). It was the first collective that I had heard of, where my sound fit.

They started this awesome roster system and it was a lot of fun.” He then left for an internship in Hong Kong and by the time he was back, it was over.

This, however, did not get him down. “I kept producing, as did everyone else, and I got more into the scene,” he said. “I used to play at house parties and other arrangements of the sort.

Then, after college I moved to New York. I was waiting to start a job in Virginia but there was a four-month waiting period. So I enrolled at this school called Dubspot to learn how to use Abelton, a software to mix music.”

After completing the course, Rahim made the tough decision of calling his parents and telling them that he wanted to make music, came back to Pakistan and released an album. On his return, Rahim got in touch with KDR’s founder, Bilal Nasir Khan, alias Rudoh. “It took me a while to convince him that we needed to do something,” he said. “We spoke to this guy named Talha and we knew were going to do something – we just hadn’t named it as yet.”

This is how Rahim and Khan became co-founders of Forever South (FxS), an internet music label. FxS is not only releasing extraordinary music, but is also getting people interested by holding live shows.

They advertise through their official and personal Facebook pages. For Rahim, organising a show takes about six weeks as they deal with sponsorship, event marketing, designing and selling tickets. So far, FxS has had four shows – Revival was held with the intent of reviving the electronic music scene in the city, their second show was called Hype and was followed by Futurama and Bash, which was held on FxS’s first birthday. They do not disclose the location due to security reasons.

Speaking to The Express Tribune about future plans, Rahim said that they were planning a country tour for 2014.

As for himself, Rahim has just returned from playing a set at the Worldtronic 2013 in Berlin, Germany and is currently busy working on another album.

A little something about Dynoman

4.  Has dance music become the new pop?: Depending on the

genre I somewhat agree that pop music is moving towards

5.  If you could be any animal, what would you be?: Penguin

6.  Should DJs do “heart hands” (interact with the crowd):

Depends on the artists. Some djs and performers don’t

set they don’t need to. I guess it depends from person to person

7.  What’s your favourite kind of crowd: People who find

enjoyment in any style of music. Berlin took the cake, the

8.  They call him Dynoman because one of his friend’s brothers

Lessons from history: ‘Teaching of history marred by different set of narratives’