2013 poll reveal­s half of the global popula­tion expect­s 2014 to create the world a better place to live in.
By Talha Ahmed
Published: December 31, 2013
Tweet Email 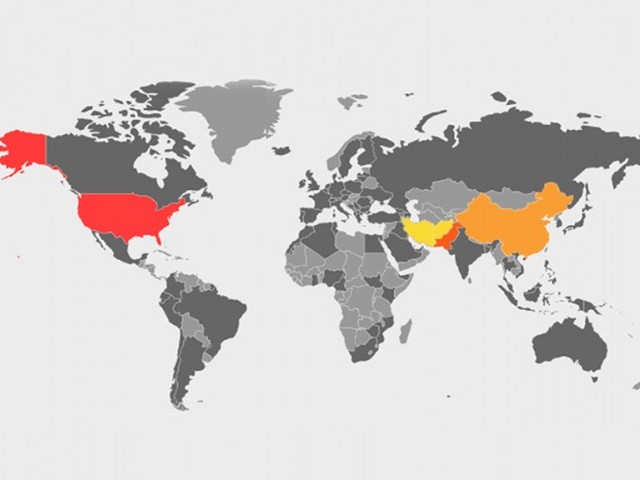 24% people round the globe consider US currently the biggest threat to world peace.

In a 2013 global survey conducted by Worldwide Independent Network/Gallup, the public perception of United States saved Pakistan the embarrassment of being labeled the biggest threat to world peace today.

24% of the world believes America represents the biggest threat to peace. In comparison, only 8% believe it is Pakistan, which is closely followed by neighbours China (6%), and Afghanistan (5%) and Iran (5%).

Citizens from arch-rival India, which is ranked at eight, may have had a large role in Pakistan’s dismal ranking, though, considering 15% of the world’s population lives there.

As for US, the results were not all that surprising considering their awkward history of controversial political and military interventions round the globe. 13% Americans considered their own country the biggest threat to peace.

The 37th annual ‘End of Year Survey’ of the association is defined as “a global study that collects the public’s view on the challenges that the world faces today”. It is supposed to be a reflection of the thoughts and behaviours of the population from 65 countries around the world.

With respect to the average global population, the bigger findings from the 2013 survey reveal:

Win/Gallup interviewed 67,806 people in total, in 65 countries either face-to-face, by telephone on online, between September and December 2013.

The global average was calculated according to the share of the covered adult population of the surveyed countries.

The survey’s Pakistan profile records answers provided by 2000 Pakistanis for each the following questions:

41% Pakistanis think the coming year will be better than 2013, with 24% saying it will be worse, 31% saying there will be no difference and the rest being indifferent/no answer.

Q2. Compared to this year, in your opinion, will next year be a year of economic prosperity, economic difficulty or remain the same for your country?

33% were optimistic for prosperity, 30% expected it to be a more difficult year while 30% said it will be more or less the same.

Q3. In general, do you personally feel happy, unhappy or neither happy nor unhappy about your life?

While 44% were happy with their lives, 16% were unhappy and 37% felt they were neither happy nor unhappy.

Q4. If there were no barriers to living in any country of the world, which country would you like to live in?

30% — the highest percentage — of Pakistanis said they would like to live in Saudi Arabia. 11% opted for United Arab Emirates while 6% wished to live in America.

22% Pakistanis said they were happy where they were and would not want to move anywhere else.

Q5. If politicians were predominantly women, do you believe the world would in general be a better place, a worse place or no different?

29% Pakistanis thought a majority of women politicians would make the world a better place, with 33% saying it would become worse. 22% of the people surveyed were of the opinion that it would not make a difference.

Q6. Which country do you think is the greatest threat to peace in the world today?

2 out of 2000 Pakistanis opined that Pakistan was currently the greatest threat to peace in the world.

A daunting 44% of the subjects said the US was the greatest threat, with 15% going for India and 13% for Israel.