Says the 'whole army' is upset with the treaso­n allega­tions.
By AFP
Published: December 29, 2013
Tweet Email 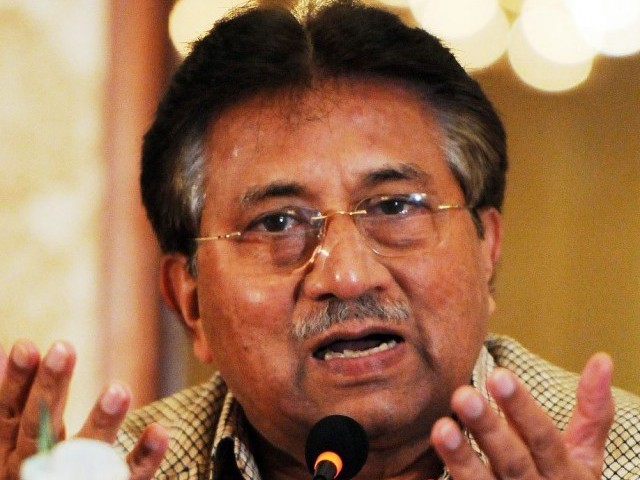 ISLAMABAD: Former military ruler Pervez Musharraf on Sunday denounced treason charges against him as a “vendetta”, and said he had the backing of the country’s army.

The 70-year-old told reporters the “whole army” was upset with the treason allegations, in his first comments to international media since he was put under house arrest in April.

The treason claims are the latest and potentially most serious in a flurry of criminal cases relating to Musharraf’s nine-year rule that he has faced since returning to Pakistan in March.

The case puts the government on a possible collision course with the army, which is seen as being reluctant to witness its former chief suffer the indignity of being tried by a civilian court.

“I would say the whole army is upset. I have led the army from the front,” Musharraf told reporters.

“I have no doubt with the feedback that I received that the whole army is… Totally with me on this issue.”

The military, which has ruled Pakistan for more than half of its 66-year history and still wields great influence, has not made any clear public comment on Musharraf’s legal woes.

The treason charges relate to Musharraf’s imposition of emergency rule in November 2007, and if found guilty he could face the death penalty or life imprisonment.

An initial hearing in the case, being heard by a special tribunal, was halted on December 24 after explosives were found along the route Musharraf was to take to court.

The case is due to resume on January 1, but Musharraf said he had not yet decided whether or not he would attend.

“The way this tribunal was formed, which involved the prime minister and the ex-chief justice, this itself smacks a little bit of a vendetta,” he said Sunday.

Musharraf’s lawyers have dismissed the charges as an attempt by the government of Prime Minister Nawaz Sharif, who Musharraf ousted in a coup in 1999, to settle old scores through the courts.

Musharraf returned to Pakistan to run in May’s general election – won by Nawaz – but his homecoming proved to be disastrous.

He was barred from running for office almost immediately and then hit with a series of serious criminal allegations dating back to his time in power, which ended in 2008.

These include murder charges over the assassination in late 2007 of former prime minister Benazir Bhutto, as well as the death of Nawab Akbar Bugti, Lal Masjid operation and the detention of judges.

Musharraf’s tribulations represent a dramatic change in fortunes for the man who led Pakistan into its alliance with Washington’s “war on terror” and was a staunch ally of then-US president George W Bush.

To add to the former commando’s humiliation, in April he was placed under house arrest.

He has now been granted bail in all of the cases against him and is technically a free man, but threats to his life mean he lives under heavy guard in his farmhouse in Chak Shehzad.

The cases have ground through notoriously slow legal system, moving from adjournment to adjournment with little clear progress made apart from the granting of bail.

As the treason case has drawn closer, Musharraf’s team have stepped up their media campaign in an effort to enlist international support.

At a press conference in London last week, his British lawyers said they had written to urge the UN to intervene in what they called a “stage-managed show trial”.

They also urged London and Washington to support Musharraf to “repay their debt” for his support in the wake of the 9/11 attacks.