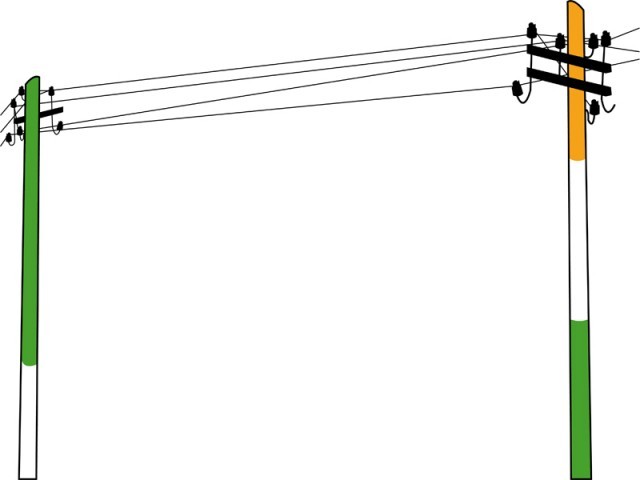 Sources said preliminary discussions with India were under way and tariff matters still needed to be finalised. DESIGN: TALHA KHAN

At a time when the international court has allowed India to divert water from the Neelum Jhelum River for the Kishanganga Dam in Indian-controlled Kashmir, Pakistan is set to sign an initial deal for import of electricity from Delhi to overcome a crippling power crisis.

Sources told The Express Tribune that the Ministry of Water and Power had sent draft of a memorandum of understanding (MoU) to the Law Division for vetting, before signing it to pave the way for electricity import.

The previous government had taken an initiative to buy electricity from India to overcome the energy crisis in Pakistan. Former prime minister Yousaf Raza Gilani had given the go-ahead for electricity import.

“The two sides are likely to ink an MoU for electricity trade,” a source said, pointing out that this was going to happen despite the fact that Delhi had succeeded in getting a decision in its favour from the International Court of Arbitration.

The court has permitted India to divert water to the Kishanganga Dam, which will hurt 900-megawatt Neelum Jhelum hydropower project being set up in Azad Jammu and Kashmir (AJK).

India has offered to supply about 500MW of electricity in the beginning and this plan could be implemented within a year by laying a transmission line.

A senior government official said Pakistan felt that it could import 2,000-2,500MW of power from India to tackle the acute shortage which had hit its economic growth bringing it down to 3% a year.

India has also expressed interest in exporting oil, but since Pakistani refineries produce low-quality oil whereas India produces oil of Euro 2, 3 and 4 standards, they cannot press ahead with the plan.

“Now, the World Bank has come up with a proposal, saying it can provide technical assistance for conducting a feasibility study of the power import programme,” an official said.

Delhi had told Islamabad that it faced problems in interconnection of power, however, Pakistani officials insisted such issues would be resolved later and the two sides were now set to sign an MoU for electricity trade, he added.

Sources said preliminary discussions with India were under way and tariff matters still needed to be finalised.

“However, the MoU will be an initial commitment to India,” the official said, adding the government of Pakistan was also working on other power import projects like Casa-1,000MW and electricity purchase from Iran.

Pakistan is currently importing 35MW of electricity from Iran to meet requirements of Gwadar, while work on increasing it by 100MW is going on. The two sides signed an agreement on the project in 2007.

Pakistan also has another project in the pipeline for import of 1,000MW of electricity from Tajikistan under Casa-1000 programme. Feasibility report of the project has been finalised and work is expected to be completed by 2016.

The country’s power production ranges between 10,000MW and 16,000MW against total installed capacity of 20,800MW. Globally, most countries generate 80% of their power requirements from their installed infrastructure, but Pakistan’s generation capacity only meets 65% of the needs due to old plants, poor maintenance and high circular debt.