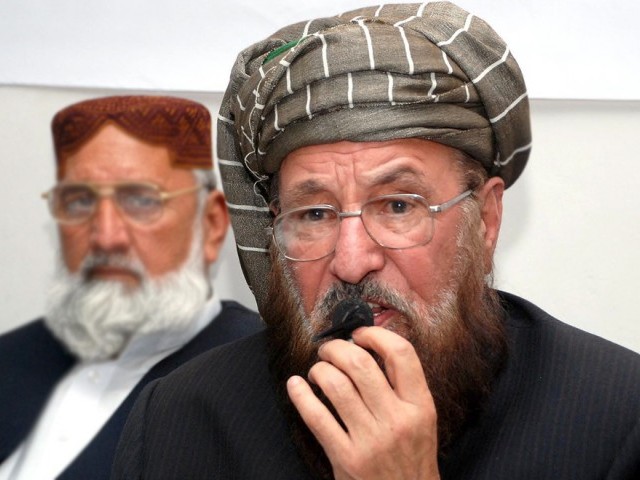 Maulana Saimul Haq said the Pakistan Air Force should be directed to shoot down the unmanned machines if the attacks fail to cease. PHOTO: INP

The Difa-e-Pakistan Council (DPC) passed a resolution on Sunday urging the federal government to further pressure the US on the issue of drone strikes inside Pakistan’s borders.

The jirga was held at the Jamaat-e-Islami’s (JI) provincial headquarters with DPC head and Jamiat Ulema-e-Islam-Sami (JUI-S) chief Maulana Samiul Haq chairing the event. Senior leaders of the constituent parties and organisations of the DPC were in attendance.

Announcing the declaration at the end of the national jirga, Maulana Saimul Haq said the Pakistan Air Force should be directed to shoot down the unmanned machines if the attacks fail to cease.

Haq stressed the federal government should withdraw from the US-led war on terror and said the government should implement the decisions taken at the all parties conference and the recommendations of the Parliamentary Committee on National Security. He also called for resumption of talks with the Taliban and urged the government not to succumb to foreign pressure on the issue.

Lawlessness in Khyber-Pakhtunkhwa (K-P) and the Federally Administered Tribal Areas is a direct result of Pakistan’s participation in the US-led war on terror, he said, adding Pakistan will see peace the very next day it withdraws from the war.

The declaration also termed the recent clashes in North Waziristan as a US conspiracy to derail the peace process and demanded an immediate end to all military operations across the country.

The JUI-S chief announced that protests against drone strikes – to be held from Karachi to Chaman to Torkham – will be intensified. He welcomed the Khyber-Pakhtunkhwa government’s efforts in blocking Nato supply routes in protest, and called for an end to US aid.

He also criticised the government for failing to follow orders of the Peshawar High Court (PHC) regarding drone attacks. He said the DPC had submitted a contempt of court petition against the federal government at the PHC which it has yet to take up.

With respect to the issue of Pakistan-India relations, the declaration criticised the federal government’s attempts to revive ties with India and said Pakistan’s overtures towards India were unacceptable, especially at a time when India is busy building dams on Pakistani rivers and constructing a wall along the Line of Control. He said any progress on bilateral relations should keep in perspective the Kashmir issue.

The jirga condemned the execution of Jamaat-e-Islami’s Bangladesh leader Abdul Qadir Mullah, and the foreign office statement, which said the hanging was an internal matter for the country (Bangladesh). The federal government was also criticised for its six-month performance by the gathering which claimed that the government has failed to curb unemployment, price hikes, and lawlessness.

The DPC chief called for the repatriation of internally displaced persons (IDPs) belonging to the tribal areas, along with a demand for the restoration of health and education facilities in the war-affected region.