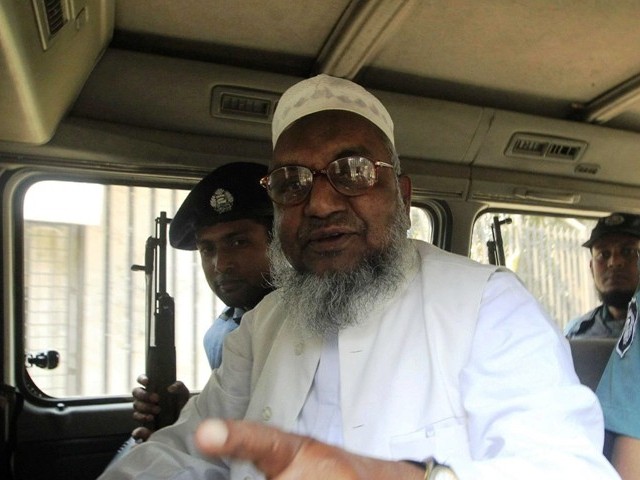 DHAKA: Thousands of people entered the diplomatic zone outside the Pakistan High Commission in Dhaka on Wednesday, Express News reported.

Police attempted to stop the demonstators, but they broke through the barricade and proceeded towards the High Commission inside the diplomatic zone.

Earlier, the activists had demonstrated against what they described as “Pakistan’s interference”, on a road beside Gulshan-2 circle.

On December 17, Bangladesh had summoned Pakistan High Commissioner in Dhaka Mian Afrasiab Mehdi Hashmi Qureshi to Bangladesh’s Ministry of foreign affairs to lodge its protest over the resolution adopted by the National Assembly of Pakistan expressing concern over the execution of Molla.

Pakistan’s National Assembly on December 16 had passed a resolution against the hanging of Jamaat-e-Islami Bangladesh leader Abdul Quader Molla with majority votes.

Molla was executed on December 12 after Bangladesh’s top court convicted him of war crimes during the 1971 war of secession.

“This house expresses concerns over the execution of Jamaat-e-Islami (JI) leader of Bangladesh, Abdul Quader Molla, for supporting Pakistan and [we give our] condolences to his family and the JI Bangladesh. This house demands of the Bangladesh government not to rake up the memories of 1971 and all cases against JI leaders [of Bangladesh] should be settled amicably,” read the resolution.

Interior Minister Chaudhry Nisar Ali Khan who began the debate over the issue, announced the government’s support for the resolution.

“Bangladesh is a sovereign state and we respect that,” but the execution of Molla, a supporter of united Pakistan, was a ‘judicial murder’ and has saddened the entire nation again”, he had said.

Get the look: Ayesha Khan, dynamic in black