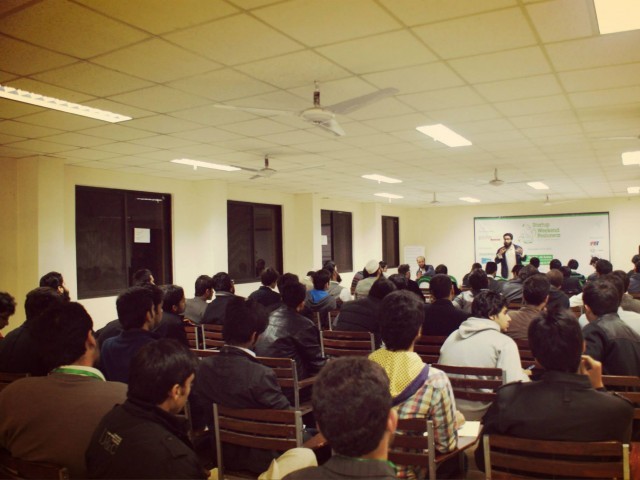 Startup Weekend is a global network in which people across the world can hold such a ‘weekend’ in their own city, bringing together designers, software developers and individuals. PHOTO: COURTESY UET MEDIA CLUB

PESHAWAR: Startup Weekend held a three-day workshop for innovators and entrepreneurs in the provincial capital. The event, which ended on December 15, was held at the University of Engineering and Technology.

Startup Weekend is a global network in which people across the world can hold such a ‘weekend’ in their own city, bringing together designers, software developers and individuals from various disciplines to brainstorm ideas and products.

During the workshop in Peshawar, young developers, designers and business students put forth their ideas for building different businesses to be judged by a panel.

The winning start-up was SMS Prescriptions presented by Umar Khayam and Usman Khan.

This mobile application will connect doctors, patients and pharmacists. It will enable doctors to text the prescription to a nearby pharmacy, and the patient will be able to collect the medicine upon presenting a code.

Virtual Classrooms is an app which will allow people to study online. Lectures would be uploaded to the website, and will be available for free to everyone, similar to those hosted by international universities.

This online platform will help craftsmen from Khyber-Pakhtunkhwa sell their products to national and international markets online.

The app will alert users about traffic problems and help suggest alternative routes. It works via crowd-sourcing, where users will help update information in real time.

ENGEECONE by Mehr and Muhammad Ismail

The idea behind ENGEECONE revolves around empowering women, as some women with professional degrees are unable to work in the field. This start-up will allow them to record lectures for an online audience and sell them to monetise
their skills.

From 6pm to 6am: District govt eases ban on riding motorbikes