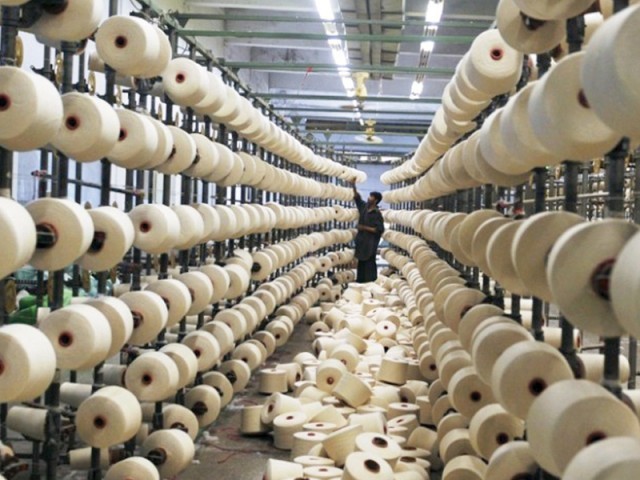 LAHORE: Taking the expected Generalised Scheme of Preferences (GSP) Plus as a source of respite for Pakistan’s textile sector, the All Pakistan Textile Mills Association (APTMA) is hoping to convert Pakistan’s current account deficit into a surplus during the next five years.

The textile industry contributes $13 billion annually to the national exchequer in exports and is confident that Pakistan will get the status. To avail maximum benefit, the textile lobby has chalked out a five-year plan, dubbed the “Vision”.

APTMA management will unfold the plan to Prime Minister Nawaz Sharif, who is expected to attend the APTMA annual dinner at the Governor House Lahore on December 14.

APTMA central chairman Yasin Siddik, while briefing the media, said that the first focus of the vision would be to double textile exports to $26 billion per annum. The next aim would be tripling cotton production, which currently is at 13.5 million bales, and defeating the energy crisis, and finally to take Pakistan’s trade balance from a deficit to a surplus.

Pakistan textile sector is working at 23% duty differential in Europe due to which the exports numbers remain stagnant in some sections. The clothing and apparel sector is stagnant at $8 billion, however, some growth was witnessed in spinning and weaving segment which are now at $5 billion, Ejaz said.

After the GSP Plus status, Pakistan can enhance exports up to another $13 billion in five years, he added.

This is not the first time that the textile lobby is presenting a ‘vision’. In 2001, it had presented a vision to the then government to double the exports by investing $5 billion in expansion.

From 1947 to 2001, Pakistan’s textile exports reached a mark of only $5 billion, but after the vision was presented, the exports doubled to $10 billion by 2005. After 2005, Pakistani exports were stagnant due to a duty structure of 23% in Europe, whereas other countries, granted GSP Plus status, managed to boost their export revenues, — major example being Bangladesh where current textile exports are around $25 billion.