From Sallu’s shynes­s to Bebo’s oomph, the show has had a series of highs and lows so far.
By News Desk
Published: December 9, 2013
Tweet Email 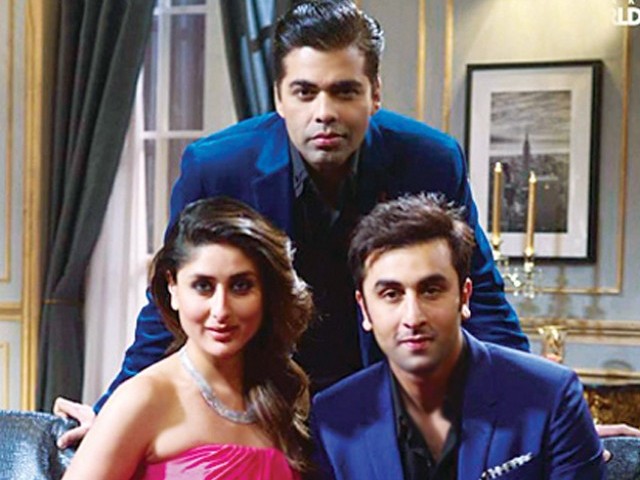 From Sallu’s shyness to Bebo’s oomph, the show has had a series of highs and lows so far.

Karan Johar is back and he promises to “spill the beans on the reigning kings and queens,” in Koffee with Karan’s season four’s promo. With his signature repartee and vivacious persona, Johar’s show returns after a three-year-long hiatus and so far, its first two episodes have been aired.

The guest list for this season comprises of Koffee first-timers such as Bollywood heavyweights actors Salman Khan and Aamir Khan, and Koffee veterans including Kareena Kapoor and Priyanka Chopra. Johar sips coffee with Bollywood A-listers on a new set and puts their wit to test in the sizzling rapid fire round, where celebrities vie to win the sought-after coffee hamper.

Over the years, Koffee with Karan has come to be known as a go-to show for B-town celeb interviews. “People are more interested in the show than my films,” said K Jo at the promotional event of the show, reports bollywood.com.

The show premiered with Bollywood big-shot Salman Khan and his father and actor-writer Salim Khan, in what was their first-ever appearance on the show. Although the Dabangg actor wasn’t so ‘chulbula’ and gave dodgy responses, his appearance on the show was a treat for his fans. The highlight of the episode was Khan’s admission of being a liar, his physical demonstration of how much he likes sleeping alone and being single, and the senior Khan’s objective opinion of his son. The episode was generally lacklustre and not juicy enough to be a show starter.

Kareena Kapoor-Khan, who Johar dubbed as the “Begum of Bollywood,” returned to the show in the second episode. Dressed in a fuchsia Monisha Jaising off-shoulder gown and sporting minimal accessories, Khan looked pretty as a picture. She was joined by her cousin and actor Ranbir Kapoor. The episode saw the beloved cousin-duo sharing the screen together for the first time. While Kareena was her usual, bubbly self, Ranbir’s responses seemed rehearsed and were restrained.

With her reference to actor Katrina Kaif as Ranbir’s love-interest and her “sister-in-law,” Khan stirred a controversy even prior to show’s airing. Although some may have referred to her as Bollywood’s big mouth, others applauded her for being her zesty self on the show. Ranbir remained evasive as far as his alleged relationship with Kaif was concerned, but he commented on his cousin Kareena’s dislike of fellow contemporary actors. The highlight of the show remained Kareena teasing Ranbir about his relationship with Kaif.

Thus far, the show has had some highs, along with some unavoidable lows. While the show has previously had the appeal to keep the audience glued to their seats, this season has not lived up to expectations thus far. Having said that, it may be too soon to lose hope in Karan’s Koffee just yet. We eagerly await the show’s next episode, which will feature Aamir Khan and his wife Kiran Rao, who, as the trailer showed, have great chemistry.

We hope that the upcoming episodes live up to Koffee with Karan’s usual pizazz!