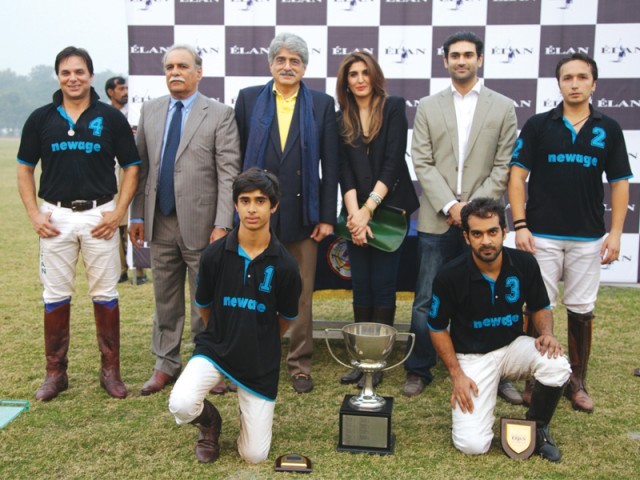 Now in its second season, the Élan Polo Cup has significantly progressed with 10 teams on board. PHOTOS: PUBLICITY

As much as the ‘Mughal City of Gardens’ is loved for its glorious heritage, colourful culture and mouth-watering food, it is also well-known for its thrilling polo season.  The Élan Polo cup, held this weekend, was marked by thrilling sporting prowess, great food, music and a glittering array of posh socialites clad in fabulous outfits.

Despite being a fashion house, Élan has actively supported and encouraged sporting activities. Earlier this year, it sponsored biker Moin Khan for his daring escapade – travelling from the US to Pakistan via road. It also promoted two American bikers on a trip around Northern Pakistan, to discover and disseminate a positive image of the beauty and heritage of Pakistan. It is the second time that Élan organised this polo tournament, which ended in an exciting match between Team Newage and Team Fresher Juices/Sherwood – the former standing victorious with a score of six to five. Shah Shamyl Alam from Newage was awarded the Man of the Match title and Taimur Hayat Noon received the tournament’s trophy from chief guest Dr Salman Shah.

“This is the second Polo Cup that we have been associated with and we are pleased with the response it has been receiving from both the polo community and fans of the game,” says Khadijah Shah, the Creative Head of Élan. “We feel there is a strong fit between our brand and polo; both are synonymous with luxury, exclusivity and royalty. This sport, still appreciated as the Game of Kings in modern times, inspires us given our craftsmanship as an art form donned by royalty.”

The Élan Polo Cup is a medium goal tournament which was introduced last year with five teams and only a single four-goal handicap player in the competition. The current tournament, however, featured 10 teams and a total of five players with a four-goal handicap, which is clearly indicative of its quick progress.

“We look forward to building upon the success of Élan Polo Cup and believe that this endeavour will take the sport to its rightful position as the most prestigious sport in the country,” adds Shah.

This or that?: Cate Blanchett