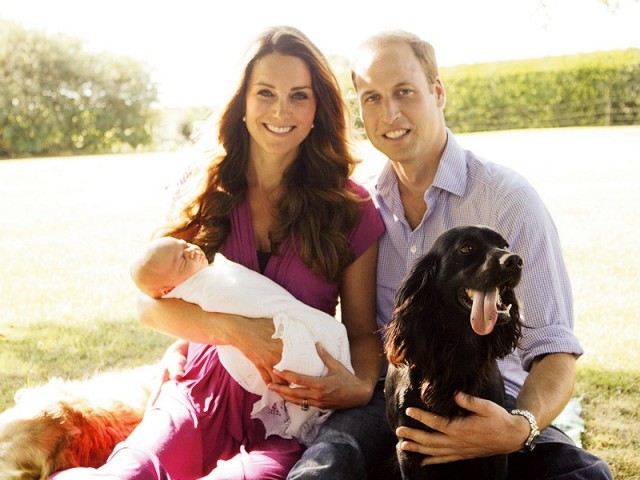 This week, we bring to you everyone’s ultimate best dressed woman.

We, the editorial team here at L&S, have taken it upon us to crown the style icons of 2013. This week, we bring to you everyone’s ultimate best dressed woman (and someone who really doesn’t need another crown) the Duchess of Cambridge and future Queen of England Kate Middleton.

Middleton has had quite an eventful year, from giving birth to the heir of the throne to having her first royal portrait unveiled in January, all the while giving us unforgettable style lessons on how to dress like a royal (on a budget!) and an elegant mommy-to-be. We’ve selected Kate Middleton’s ten best looks from 2013 for your sartorial viewing pleasure, and let us tell you, it wasn’t easy.

1. Can we just take a moment to appreciate how flawless the Duchess looked in the cream-coloured dress with ruffle detailing by Sarah Burton for Alexander McQueen and the Georgie by Jane Taylor fascinator she wore for Prince George’s christening? Coordinating perfectly with her son’s white satin and Honiton lace christening gown, Middleton’s ensemble is a no brainer for her best look of the year.

2. Middleton subtly paid homage to her late mother-in-law, the equally iconic Lady Di, by selecting an empire-waisted polka dot dress by Jenny Packham for her debut post-Prince George’s birth. She also, much less subtly, dispelled the myth that all mothers should be perfect postpartum by choosing a dress that did not hide her post-baby bump.

3. Which isn’t to say she didn’t give women everywhere a reason to envy her even more than they already do just a few months later. Middleton slipped back into her signature skinny jeans and wedge heels to play a game of volleyball during the SportsAid workshop at the former site of the Olympic Park in London. The sporty new mom’s post-baby abs showed off her fit, flat stomach, just three months after she gave birth to her son.

4. Pretty in peach on the day of her second wedding anniversary, the pregnant royal wore a Manteau Trapeze Coton Serge jacket by Tara Jarmon along with a matching frock by her own dressmaker and her favourite pair of nude LK Bennett court shoes to visit the Naomi House Children’s Hospice.

5. On January 11, Kate repeated a dress when attending the official unveiling of her first portrait at the National Portrait Gallery. She looked beautiful, radiant and young (compared to the portrait) in a maroon belted Sophie Rae dress by Whistles. Our sense of style and limited wardrobe thank her for the excellent example she sets when it comes to fearlessly repeating clothes.

6.  This Black and white polka dot dress by Topshop sold out within an hour of Middleton stepping out for a Warner Brothers Studio Tour in April 2013. She has long been an advocate of mixing high street with high end, and this look is no exception. This look, a £38 dress paired with a Ralph Lauren jacket, was voted Middleton’s best maternity look by the readers of whatkatewore.com.

7. This week, Middleton stepped out in a recycled, sleek cream Roland Mouret  Lombard gown with a daring leg slit for the UK red carpet premiere of Mandela: Long Walk to Freedom. Further proving that you don’t need to spend a million bucks to look like royalty, she paired her gown with a $35.90 statement necklace from Zara. If her innate chic wasn’t enough to call her our style icon for 2013, her penchant for making accessible style statements certainly is.

8. The Duchess wore an icy blue 1950s style cocktail Emila Wickstead frock and grey suede pumps for an appearance at an evening reception hosted by the National Portrait Gallery in London. While the dress was by no means maternity wear, it did wonders to hide her baby bump and make her look radiant at the same time.

9. New mothers everywhere sighed when Middleton glittered in pale gold sequins as she attended her first red carpet since the birth of Prince George, two months previously. She wore a glittering floor-length Jenny Packham dress back in September, for the Tusk foundation gala dinner at The Royal Society in London.

10. Middleton and her baby bump of 7 months wowed in  this Marella coat by Emilia Wickstead. The Duchess brightened up a gloomy day in London in this sunny yellow collarless creation, paired with a (repeated) Jane Corbett hat, her oft-carried Park Avenue clutch by Russell & Bromley and her favourite nude heels.

Did You Know? Irfan Khan to play an Arab in a Brazilian film