Sessio­ns seek to do what the govern­ment cannot — preser­ve cultur­e and musica­l arts.
By Rafay Mahmood
Published: December 7, 2013
Tweet Email 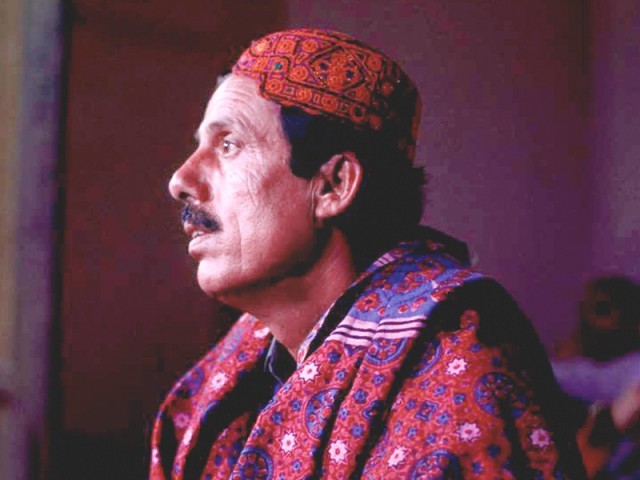 Lahooti has served as an authentic bridge between the streets of interior Sindh and a mainstream venture like Coke Studio. PHOTO: PUBLICITY

It’s a cold and windy evening in Jamshoro, as a few youngsters are busy organising a musical show, but they haven’t booked a venue. A musician called Saif Samejo offers the roof top of his house; a place that has now become a hub of cultural preservation and the anchor point for what Samejo and  his friends have mutually named the Lahooti Live Sessions — a forum where indigenous musicians from Sindh record folk tunes and later release them on social media.

Najeeb Jatoi is a Jamshoro-based textile designer, who obtained his formal education from NCA Lahore, and now prefers to voluntarily contribute his set-designing expertise to Lahooti Live.

“When I was a kid and my father used to make me listen to these folk musicians, I used to hate them because I couldn’t understand what they were saying,” he chuckles.

“Lahooti, on the other hand, is giving everything a very modern representation, which I think will play a crucial role in taking the right message to the new generation. This is also the reason why I have made the set look as traditional and colourful as possible, something that will add vibrancy to the final product.”

Samejo himself is the front man of the Jamshoro-based rock band The Sketches, and the Lahooti Sessions are in the vein of something that he has wanted to do for a long time; cultural preservation in its most unadulterated form. Now, it appears that his dream is finally being realised.

“This is how we like to spend our weekends in Jamshoro , significant yet melodious,” says Samejo, as he gives the green signal for sound check.

“The aim was not only to record these musicians, but to do so in the highest possible audio-visual quality sso that they can be presented in  an equally good manner on social media,” Samejo adds.

Lahooti has served as an authentic bridge between the streets of interior Sindh and a mainstream venture like Coke Studio.

The quality control seems to have worked, because some of the traditional instrumentalists from Sindh who have been featured in Lahooti Live Sessions have transitioned to the more mainstream platform of Coke Studio.   Fakeer Zulfikar, a multi talented musician who can play the Tamboora, Changg and Bureindo, has been featured in Coke Studio this year. He returned for the latest Lahooti session last weekend, but as an audience member this time. Though busy helping some modern musicians understands the dynamics of the Tamboora, he spared some time to share his journey with The Express Tribune.

“Ventures like Coke Studio have a very generic understanding of indigenous music. I believe that Lahooti has served as an authentic bridge between the streets of interior Sindh and a mainstream venture like Coke Studio,” Zulfikar said.

He believed that playing instruments like the Bureindo and Changg is a dying art and only ventures like these can help preserve them, because the folk musicians themselves don’t have the vision or resources to do so.

Arieb Azhar, the visiting musician who enthralled everyone with epic renditions of different Sufi Kalaams and a few ghazals, found the session to be an overwhelming experience.

“I have been following the Lahooti Sessions from Lahore and Islamabad, and I’m such a huge fan. To be a part of it was a great privilege” says Azhar.

“Personally, my musicians and I believe that soul music is something that is coming out of our roots and folklore, but unfortunately very few people are producing it in its true rawness. Mostly, it gets tempered in the process.  We are fortunate to have soul music running in our veins and even more gifted to have musicians like Saif, who are heading in the right direction with it.”

Sadly, the last provincial government didn’t entertain Samejo’s offer to archive the talent of the musicians who perform at shrines all across Sindh. He had offered to do all the recordings on his own and make them a part of the Sindh cultural archives, but nothing worked out between him  and the government.

“If something can be achieved on governmental level, no one will have to worry about tracing all these cultural mascots down when needed. Having said that, with or without the government, we plan to carry on with Lahooti Sessions,” says Saif, “For us, this is a cause beyond any commercial gain or sponsorship.”