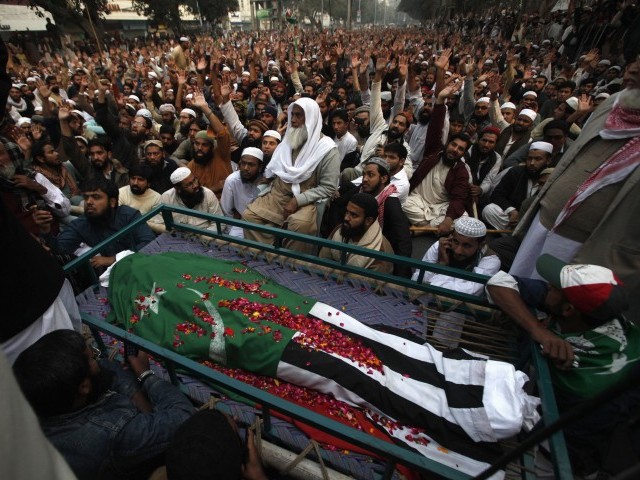 Supporters of Ahl-i-Sunnat Wal Jamaat (ASWJ) sit near the body of their party leader Maulana Shamsur Rehman, wrapped in the party's flag, while shouting slogans during a funeral procession in Lahore December 7, 2013. PHOTO: REUTERS

The namaz-e-janaza was supposed to be held today at 2pm but was delayed by protesters who demanded assurance from the government that the culprits will be caught.

They maintained that until they heard from the authorities, the ASWJ workers would continue to block roads and may even go to the Punjab Assembly to register their protest.

By early Saturday, evening, the party ended the protests after a three-member delegation from ASWJ met with the Lahore Capital City Police Officer (CCPO) at his office and received an assurance from him that the police will capture the culprits.

Following the meeting, the CCPO issued a statement saying that the talks were successfully completed.

Earlier during the protests, an angry mob shouted slogans outside the Governor House and on Mall Road and demanded the killers be caught as soon as possible.

Earlier in the day, ASWJ members also staged protests in Rawalpindi and Sheikhupura.

They blocked the Faisalabad Interchange from all four sides. The motorway to Islamabad from Rawalpindi was also blocked causing inconvenience to the general public. Police reached the area to avoid any untoward incident.

Muawiya was shot dead in Lahore on December 6. He was killed after unidentified gunmen opened fire on his car along Ravi Road. The ASWJ leader was returning home after leading Friday prayers at the Muhammadi Mosque in the Ravi Road locality.

On December 6, ASWJ had announced that its members will stage a sit-in on the Islamabad Highway at Faizabad on Saturday morning to protest the killing of its provincial leader in Lahore.

The ASWJ members had rallied at Aabpara Chowk around 5pm yesterday to condemn the killing of Shamsur Rehman. The Kashmir Highway and roads leading to Aabpara Chowk had remained closed for over two hours, until the demonstrators started dispersing for Isha prayers around 7pm.

Accident: Eight of a family perish in DG Khan